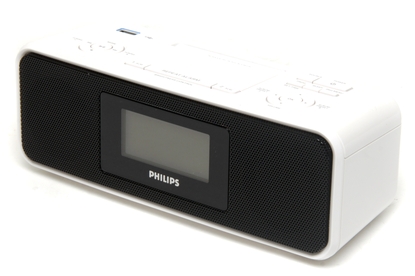 The DC200 is an ideal choice if you are after a compact alarm clock with iPod functionality. The USB port is an added bonus, but don’t expect outstanding sound quality.

Yet another radio alarm clock doubling as an iPod dock, the Philips DC200 attempts to differentiate itself from the highly saturated market with a port for direct music playback from USB storage devices. In addition, this unit is almost compact enough to hold in your hand, making it ideal for users looking to save space in the bedroom.

Perhaps one of the DC200's most appealing features is its size. It's much more compact that it looks in the promotional images and this is excellent news for those with little space in their bedrooms. Its rectangular, boxy design isn't really a head turner, but the white, plastic finish with black speaker grille does complement the iPod quite well.

The controls are straightforward and consist of two five-way navigational pads, in addition to a variety of other buttons. There is no remote control and this is understandable considering the DC200 has been designed as an alarm clock first and foremost. On the other hand, we feel a remote would have been an ideal inclusion considering the iPod capabilities. The large, easy-to-press snooze button is an essential for those, like us, who inevitably hit it a few times each morning for that extra few minutes rest.

In addition to an FM radio with presets and an iPod dock, the DC200 also boasts a USB port for direct MP3 and WMA playback from a USB mass storage device (such as a USB key). The USB port is conveniently located on top of the unit, beside the iPod dock. Using it is as simple as connecting your USB key; the DC200 automatically begins playback. Conveniently, the small LCD shows a scrolling ID3 tag of each file when playing, so you can keep track of what you are listening to. You can also group your music into folders to create albums, though the DC200 doesn't name these folders — instead just displaying A1, A2 etc.

The DC200 supports most iPods with a dock connector and there are four plastic dock inserts included in the sales package. The unit hasn't been designed to work with the iPhone, though we tested and used one without any issues. Conveniently, docking a supported iPod gives users access to basic playback controls including play/pause, previous track and next track, while pressing the iPod menu button takes you away from the 'now playing' screen and into the iPod's main screen. Sound quality is reasonable, but obviously not outstanding. It's fine for small rooms, but don't expect the DC200 to fill a large room with adequate sound. We were a little disappointed at the fact that there are no basic settings such as bass and treble adjustment. Users should also be wary of distortion at higher volume levels.

The FM radio is fairly basic but it does include the option to store 20 presets. A nifty feature is automatic programming — simply hold down the 'prog' button for more than two seconds and 20 available radio stations will automatically be stored.

In addition to the regular, monotonous alarm tone, the DC200 allows users to wake to the iPod, the FM radio and what Philips has dubbed 'nature sound mode' — five tracks of pre-loaded relaxation music.