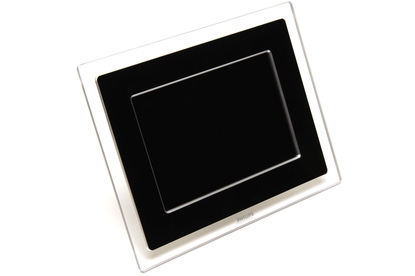 Even though it's one of the better digital photo frames on the market, the Philips 9FF2M4 still isn't the perfect replacement for a traditional photo frame, but it offers a decent alternative if you want to try something new.

Digital photo frames have always been a cool concept, but most of the models we've seen haven't really lived up to their potential. So when we received Philips' latest effort, the 9FF2M4, we were hoping the company's experience in this area would finally lead to a product we'd be proud to show off in our homes. In some ways this product lived up to expectations, but there are several niggling issues that prevent it from being as useful as it could be, including a clunky interface and poor onboard storage.

The 9FF2M4 has a 9in display with a resolution of 800x600. This is a good resolution for a screen of this size, but we're hanging out for a product with a few more pixels. During our image quality tests, the screen produced mixed results. It was sharp in simple areas, such as along the edges of our test charts, but in our outdoor shots, patches of intense details, such as foliage, were poorly rendered. They looked blocky and lacked the sort of clarity we're looking for from a device like this. The lack of definition is noticeable across a wide variety of shots and, while from a distance it may not be obvious, any close scrutiny will easily reveal the difference between this and a real photograph.

The display was quite bright, with well saturated colours and good blacks. It still didn't live up to a regular photograph in this regard, but it did noticeably better in the colour tests than it did in the sharpness tests.

Our main complaint is with the unit's controls. The menu itself looks quite nice and is broken down intuitively into a tiered setup. However, the controls are comprised of a thumb-stick and two buttons, which rest on the back of the frame. They are quite fiddly to use, with poor mounting that makes them difficult to press. This isn't helped by the fact that you can't look at them and the display at the same time, so you have to go by feel.

The controls also act differently depending on which part of the menu you're in. Most of the time, you select things by pushing down the thumb-stick, which acts as the OK button; other times, you'll have to scroll left or right to go forwards or backwards through the menu. Often, it isn't clear exactly how to get out of various sections of the interface, which can slow down the navigation considerably.

A wide variety of funky options are present, although we're not entirely sure how many people will use them. For example, there's a huge array of transitions, everything from checkerboards to mosaics and folds. Most of them look ridiculous, however, and probably won't be suitable for most people's uses. The same goes for the included frames, which are a novelty, unless you want a giant white heart encircling and cutting off half of the image. Also present are black, white and sepia modes, and you are given the ability to randomise your pictures or to just follow the order they were captured in.

As usual, a wide array of memory formats are supported, including SD, MMC, Compact Flash, Memory Stick and xD cards. They are all plug-and-play, meaning you simply pull the card out of your camera, insert it into the frame and you're ready to go. The shots can also be copied to the frame's internal memory, but Philips has only supplied a paltry amount--17MB--which is odd considering how inexpensive flash memory is these days. Admittedly, the frame shrinks photos to the native resolution of the screen when you transfer them, meaning that the 17MB of memory goes a lot further than it would with full resolution shots (Philips says that it can store 110-150 photos).

The unit comes with an AC power adapter, and a Mini-USB port for connection to a PC. The included software facilitates the easy transfer of pictures stored on your PC. We had no issues with the software, and found file transfers to be speedy.

The frame itself looks the same as previous Philips models. It has a clear plastic rim surrounding a simple black bezel. On this unit, however, Philips also gives you the option of changing the bezel colour, which is a nice touch. Black, red and silver bezels are included. A silver stand on the back of the unit can be altered to achieve the desired viewing angle, and this is screwed into place using the provided allen key.

Overall the 9FF2M4 looked quite good in our tests and its style should fit-in nicely with a modern lounge or dining room suite.