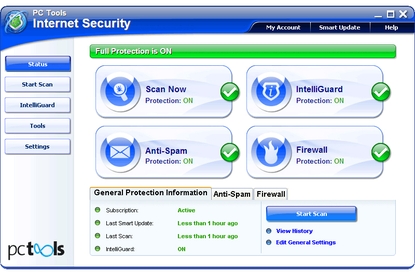 Does slow and steady win the race?

PC Tools' answer to this question is a definite yes: Get it clean, no matter how long it takes.

Sure enough, PC Tools Internet Security 2011's scanning performance is quite good, with 24 out of 25 real-world attacks blocked (tied for tops in this test), and an above-average 97.7 percent of zoo malware detected. In our tests, there were virtually no false positives to be found, and, best of all, PC Tools had the best rating of all 13 applications we reviewed at fixing infected systems, removing active malware components 80 percent of the time—tied for the best score—and removing all traces on infections 70 percent of the time—the best overall performer in this test.

The downside is that PC Tools generally takes its time with all of this. Its on-demand scan speed (which measures how quickly a product can scan files when you manually start a scan) was 12th out of 13, and PC Tools had the biggest overall impact on our PCs' performance out of the products we tested, slowing your system down considerably.

Perplexingly, that's not the end of the story: Unlike on-demand scanning, on-access scanning with PC Tools Internet Security is really quite spry. In fact, it was the fastest at these automatic file-by-file scans among all the apps we tested, a stark contrast to its other speed metrics.

In practice, the slowness of PC Tools' on-demand scanning was definitively noticeable. Running a full system scan took more than an hour—not including when my test system crashed in the middle of a scrubbing—and PC Tools is fond of numerous update operations and mandated restarts. We were also not thrilled with the lack of information PC Tools provides during its scans. In our hands-on tests the progress bar would very quickly jump to "90%"... then it'd stay there until the scan was nearly complete.

Getting around PC Tools Internet Security is a simple affair. Four big status buttons tell you if you're safe from malware and spam and whether your firewall is engaged, and settings are easy to access, offering an appropriate, moderate number of configuration options.

On the other hand, some of PC Tools' decisions are curious. We're not at all sure why a security tool would need an integrated registry editor, and dropping the log file viewer into the settings menu is a strange place for it.

Given PC Tools' bargain-bin pricing—at $79 for a one-year, three-PC license (as of 12/2/2010), it's nearly the cheapest application we tested—as well as its solid security performance, it's tempting to give this suite heavy consideration. And to that, we say go for it—provided you don't actually want to use your computer for anything else while scanning it for malware.