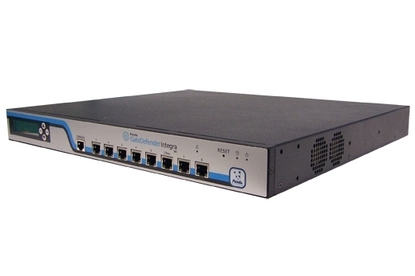 The Panda GateDefender Integra 300 is very bound to sys-admin culture and so requires some solid network-management skills. But if you're already an expert, you'll appreciate how it does almost everything from inside a single rack-mounting box.

For home users on broadband, a router firewall and a combination of antivirus and spyware software should be enough to keep out most online marauders. But if you're running a business, lost time is lost money.

Physically the Panda GateDefender Integra 300 is a 1U rack-mount server-style box that's designed to slot into a machine room. It's not quiet, and it's certainly not practical to leave it in an office environment and expect people to work around it.

Functionally the Panda GateDefender Integra 300 bundles all of the tools mentioned above and makes them available in a slot-in box that's designed to plug into your network.

Although the price of Panda GateDefender Integra 300 appears high, it's certainly much lower than the prices more usually charged for boxes with these features.

However, unless you have good network experience you may find yourself out of your depth in the set-up process, which could have been made friendlier and more accessible. Nonetheless, once you're into the system, you'll find a wealth of options. On the network side you can configure different sub-networks with various security features connected to each of the eight sockets as well as an Internet/WAN input.

Although there's a wizard to help with this, it's not a simple process, especially if you've never done it before, and it would have been helpful had the Panda GateDefender Integra 300 offered more in the way of default configuration options, or even just some examples to get beginners started with minimal fuss.

You can also run the Panda GateDefender Integra 300 in transparent mode, which means it slots in between your Internet connection and your network more simply, but you do then lose some of the more advanced security configuration options.

On the security side you can choose any or all of the spam filtering, site blocking, virus removal, spyware removal, VPN (Virtual Private Network), and firewall features. The Panda GateDefender Integra 300's firewall defaults to letting nothing at all in, which is good for security but you'll need to start poking holes in it for services like VoIP.

Again, this has to be done by hand. Virus filtering is by way of Panda's own solution, which is robust and well-respected. Other services, though, have been imported from third parties.

The Panda GateDefender Integra 300's Web blocking system uses a solution by ISS (Internet Security Systems) which offers a regularly updated list of offensive or dangerous URLs that can be selected by category. You can also add your own keyword searches, although this takes a while to configure and needs to be set-up carefully to avoid false positives.

Both incoming and outgoing e-mail can be filtered for offensive content as well as spam, and there's even an attempt to catch phishing requests -- although these are evolving all the time, so 100 per cent reliability is unlikely. The Panda GateDefender Integra 300 can also filter out scripts from Web pages, check for suspect files in FTP or Web downloads, and use heuristics to track polymorphic viruses.

In testing we found that virus trapping was very good, but spam and Web blocking could be a little hit and miss. This isn't a complete surprise -- spam lacks the hard edges of a virus payload, making it harder to spot definitively. But avoiding false positives took some fine tuning, and this could be a distraction in an office environment.