Panasonic’s largest, biggest, best 3D plasma -- but is it as good as you’d hope? 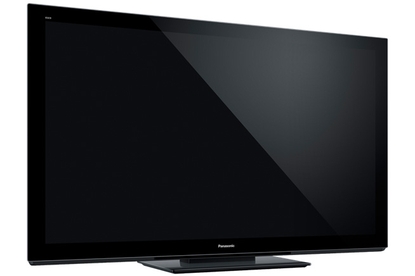 Panasonic's latest and greatest and largest 3D plasma TV is excellent when paired with a high quality Blu-ray player, for both 2D and 3D movies. It's not even especially expensive given its huge screen size. Its internal digital TV tuner isn't very good though, so we'd recommend pairing it up with a TiVo or other high quality PVR. In addition, a few other questionable video quality changes since last year's VT20 mean that the VT30 isn't better in every way. Chassis thickness and bland bezel aside, the VT30 is a television that we're generally impressed with.

The VIERA TH-P65VT30A is the biggest, best, most powerful and most expensive television in Panasonic’s consumer plasma TV line-up. The model number denotes its 65in screen — the largest you’ll find a plasma or LED — and the VT30A model range, which is Panasonic’s most distinguished. We were very impressed by last year’s Panasonic VIERA VT20 and we were expecting the VT30 to improve on every aspect. It doesn’t, though, and its flaws do mean you’ll need to pay extra if you want the absolute best TV.

Think of almost any Panasonic TV you’ve seen in the last three years, and you’ll get a pretty close approximation of what the VIERA TH-P65VT30A looks like. However, the VT30A has a much nicer flat-fronted bezel than its predecessors, a dark, near-black colour scheme and a squarish stand (with no swivel or tilt, unsurprisingly) — none of the dark browns, greys and silver accents of last year’s VIERAs. Panasonic’s plasma TVs, although burdened with thicker chassis designs than their competition, are always reassuringly solid and don’t wobble at all when the stand is securely fastened.

Another thing we can’t fault is Panasonic’s extensive connection options. Four HDMI ports, three USB 2.0 ports (and SD card reader), integrated Gigabit Ethernet networking, and the optional 802.11n Wi-Fi through a bundled adapter are the features we think most users will be looking for, but the VIERA TH-P65VT30A also has plenty of analog video and audio inputs.

Setting up the TV is a reasonably straightforward process, after you’ve gone through the exercise of unpacking and assembling — it’s no lightweight at 63kg — and then connecting all necessary cables. The usual Panasonic startup procedure asks for your digital TV region before a quick initial station scan, and the procedure for setting up networking via Wi-Fi is straightforward (with additional ease offered through Wi-Fi Protected Setup).

Image processing for Full HD video is improved over last year’s model, with no over-sharpening or excessive noise but a very slight increase in overall image detail. On such a large screen (165cm diagonally) you’ll need to be sitting at least four metres back to comfortably view the full image, but from our reasonably close seating location we were impressed with the amount of on-screen detail we could see in Full HD Blu-ray movies, HD digital TV broadcasts and high-definition games through a connected gaming PC and Xbox 360 console.

The Panasonic VIERA TH-P65VT30A’s near-infinite contrast ratio means that black levels are excellent, with un-lit parts of the screen effectively disappearing. In an otherwise dark room, the TV almost disappears when no video is on-screen — and more impressively, it’s simultaneously able to show very bright whites and vibrant colours on-screen alongside these blacks. This VIERA VT30A is the best plasma we’ve seen for use in a well-lit room or day-lit area — its brightness levels in its standard settings easily rival the majority of LED TVs.

3D is similarly slightly improved, with almost no incidents of visible cross-talk on fast-moving on-screen objects. It’s hard to notice these happenings even if you’re looking for them, so we’d happily recommend the VIERA TH-P65VT30A for 3D viewing on an equal level to the LG 47LW6500, although its larger screen size makes for more impressively deep 3D effects.

Where the VIERA TH-P65VT30A struggles is when displaying the output from its internal TV tuner. Standard-definition free to air digital TV tends to look blurry on the edges of fast movement and interlacing artifacts are clearly visible. We connected a TiVo HD set-top box and the problem disappeared, so if you’re going to be mostly using the VT30A for watching TV we’d spring for a PVR (at an additional cost, of course).

Another minor complaint is with very occasionally ‘shimmering’ blacks — Panasonic employs a system to stop screen burn-in that fires coloured sub-pixels in black areas of the screen, and while this isn’t usually viewable during video (when entirely black areas rarely stay on the screen long) it’s noticeable if you closely examine the VT30A while no content is being played. It’s a smart feature but video purists will likely be annoyed by it.

Panasonic’s VIERA Connect online app store and IPTV offering is not up to par with the services from Samsung, LG or Sony — it’s disappointing because the company’s TVs are otherwise excellent — but the service has had an overhaul with the addition of the VIERA Market which lets users purchase apps created by third-party developers. We generally only use the IPTV functions of Internet-connected TVs, but if you intend to use your TV for Facebook, Twitter, or built-in games we’d say the Panasonic is an acceptable choice although competitors are superior.

Panasonic’s VIERA TH-P65VT30A improves marginally on last year’s VT20 in most areas, although it isn’t an entirely trouble-free upgrade. We don’t see any compelling reason for owners of the VT20 or other similar vintage Panasonic TVs to upgrade, but the VT30 is a generally good television with near-excellent image quality, which is unfortunately marked by a few minor problems.