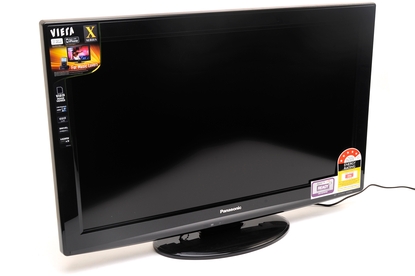 The Panasonic Viera TH-L32X25A is a competitively priced 32in LCD television that distinguishes itself from the crowd with its bundled iPod/iPhone cradle. If you're looking for an all-in-one LCD television, the Viera TH-L32X25A does a good job of playing both audio and video through the iPod dock as well as its USB and SD card ports.

The Panasonic Viera TH-L32X25A is a 32in LCD television that comes with an iPod/iPhone dock. If you're looking for a small and simple television to function as a digital home entertainment hub, the Viera TH-L32X25A should serve well thanks to its wide range of digital inputs and supported file types.

The Panasonic Viera TH-L32X25A doesn't depart from Panasonic's tried-and-tested 2009 formula of smooth curved bezel and piano black finish. It's an attractive television and is well constructed, but the slightly recessed screen and thick chassis — the television is 83mm thick, due to its bulky CCFL backlight — does mean it's not as suited to small rooms and cramped spaces as an LED model like the Kogan ELITE LED32.

As well as its three HDMI inputs the Panasonic Viera TH-L32X25A supports older home entertainment products with component, composite, S-Video and VGA inputs. More interesting is the bundled iPod/iPhone cradle, which works just as you'd expect — it allows you to play music and video from your Apple portable media player while also charging it. USB and SD ports are hidden on the television's side, supporting JPEG pictures, MP3 and AAC audio and AVCHD video.

As a relatively low budget CCFL-backlit LCD television, the Panasonic TH-L32X25A isn't going to win any awards for outright visual brilliance; however, it does a good job of displaying digital television and most DVD and Blu-ray content. It's not a Full HD television — it has a resolution of 1366x768 pixels, sitting in between the now-rare 720p and increasingly common 1080p standards. When presented with 720p or 1080p video it's able to display good levels of fine image detail with no visible scaling artefacts. Overall contrast is lower than we'd like for movie watching, though — several scenes in the The Dark Knight and Watchmen Blu-ray movies looked a little washed-out and lacked detail in shadow areas.

The real draw-card of the Panasonic Viera TH-L32X25A is its bundled iPod dock. It's easy to use — the on-screen display is large and clear with appropriately sized text. If you don't want the hassle of setting up a mini hi-fi or home theatre system, the dock is an easy way to play your iPod or iPhone's music collection through some more powerful speakers. The Panasonic Viera TH-L32X25A's speakers are generally capable, although audio could be clearer and will begin to distort if you turn the volume too high. File playback via USB and SD uses a similar interface to the iPod dock; while it's chiefly meant as a playback system for photos and movies captured with a compact camera or camcorder it's also usable in a pinch for playing your music collection off a USB flash drive or external hard drive.

Panasonic's Viera TH-L32X25A has a five-star energy rating, which is reasonably high given that it uses an inefficient CCFL light source. Panasonic's figures rate the Viera TH-L32X25A at an average 69.3 Watt power usage during normal operating conditions. The company's environmental policy states that the company is dedicated to "continual improvement and prevention of pollution", including reviewing "our activities to develop objectives and targets to minimize the impact of the business on the local environment and develop appropriate programs to achieve these objectives." Panasonic also runs an Eco Ideas Web site that outlines its environmental initiatives.

The Panasonic Viera TH-L32X25A is a competent mid-size LCD television. If you want a single device for playing from multiple audio and video sources — perhaps in a tight space like an office or study — the Viera TH-L32X25A doesn't put a foot wrong.