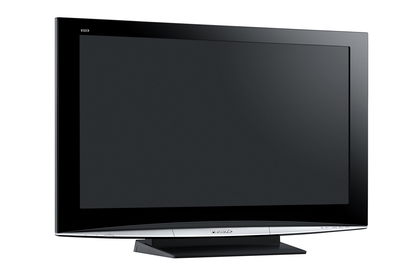 Another great plasma from Panasonic. The TH-42PZ800A produces a great picture with some of the best blacks we've seen; it only suffers from a few niggling issues.

If you follow the school of thought that bigger numbers mean a better product, then the Panasonic TH-42PZ800A should certainly impress you. Boasting a 30,000:1 native contrast ratio and a whopping 1,000,000:1 dynamic contrast ratio, the numbers are certainly on its side. Fortunately it has the picture quality to back up its impressive specs; it is one of the best plasmas currently on the market.

With a 1920x1080 resolution, this panel is capable of playing back full high definition footage at its native resolution. It is a 42in display — this is about as small as Full HD screens come these days but it is still a large enough for most lounge rooms.

It should come as no surprise given its specs that this unit has excellent blacks. While perhaps falling a little shy of those produced by Pioneer’s Kuro range, they are nonetheless extremely rich and deep and should impress even the most discerning enthusiast. Contrast performance on the whole was stellar with excellent detail in dark areas.

Colours were also excellent. We tested on both normal and cinema modes. Cinema presets typically dull things down a little but give source material a more natural look, and the TH-42PZ800A was no exception. We found this mode was by far the best option for most source material, although for something like sports you may want a more vibrant option.

When rendering HD films via our Xbox 360 the image looked great. Skin tones were accurate and colours were balanced and vivid without being too oversaturated. The picture was crystal clear, with well-defined edges and great detail rendering. Anyone looking to watch a lot of HD content will be well served by this screen.

One of the only issues we had was a small amount of flickering and noise evident in some scenes, but it wasn’t too problematic and seemed to come and go. It was also evident in our standard-definition tests but not to the same degree. Our other concern was with the relatively limited calibration options. With no user-defined colour mode you’re forced to stick with the presets, which may frustrate some purists.

Standard definition was pretty well rendered all things considered. 1080p panels typically struggle with this kind of content due to scaling and thus it’s wrong to expect perfect results. The TH-42PZ800A does a pretty similar job to other Full HD panels. There were some scaling artefacts and edges were a little soft at times, but colours were accurate and the brilliant blacks seen in our earlier tests also returned. Overall the image was good and competitive with other models on the market.

Motion was extremely fluid, as you’d expect from a top tier plasma. It does have a 100Hz mode but we found it messed with the image quality somewhat and in general we aren’t fans of these features, so we turned it off. Motion was smooth and showed no signs of streaking or trailing.

The unit comes equipped with three HDMI ports, which is relatively standard. One of them is on the front, which is both a boon and a curse. On the one hand it allows easy access, but on the other it doesn’t look nice having a plug on the front if you have to use all three ports. Aside from that there are the usual component, composite and other standard-definition ports.

It looks pretty smooth, with a glossy black bezel and glass rim. We had some minor issues with the glass cover causing reflections when viewing from an angle but it wasn’t too problematic. A seven-day electronic program guide is built-in, which is a nifty inclusion, and it is backed up by a Full HD tuner. There is also an SD card slot for photo viewing.