The Panasonic Toughbook CF-19 can be dropped, kicked, splashed with water and exposed to dust, and it'll love it! The Panasonic Toughbook CF-19 feels every bit as tough as it. It's rugged features allow it to withstand the elements and clumsiness. It's well suited for field assignments and factory floors, and basically useful to any professional that has to work outdoors -- as long as they can afford it and don't mind the small, uncomfortable size.

The Panasonic Toughbook CF-19 is a fully ruggedised tablet-convertible notebook that's water resistant, completely protected against dust ingress, and which will withstand drops from 180cm onto hard surfaces. It's not the type of laptop you should choose to take to the classroom or office every day (even if you could afford it); it's the type of laptop you should choose if you work outdoors or in rough environments where more delicate computing devices would stand less chance of survival. You'll regularly see Toughbooks in cop shows (Lester in The Wire is seen using one, for example), but other than law enforcement, they can be used in dusty factories or out on construction sites, and they are also well suited for adventurous scientific purposes, such as storm chasing.

Everything about the Toughbook CF-19 looks different when compared to a regular notebook — even the screen, which is 10.1 inches and sports a 4:3 aspect ratio instead of a wide screen. The base of the notebook has compartments for all of its ports and slots and each compartment is covered with a flap that requires strong fingernails or an implement of some sort to open. Behind these flaps you'll find all the features that this notebook supplies: USB 2.0, Gigabit Ethernet, mini FireWire, VGA, Serial, headphone and microphone ports, a SIM card slot and an SD card slot. It even has ExpressCard/54 and PC Card slots and a 56Kbps modem. All the flaps are labelled with the logo of the component that they hide so that you won't have to open them all up or memorise them to find the one you want.

The covers protect the inside of the laptop from dust and water ingress and the screen, touchpad and keyboard are also all water resistant. You can't completely submerge the Toughbook CF-19 and expect it to re-surface unaffected by water, but you can expect it to survive splashes of water while it's being used in adverse weather conditions, for example. The underside of the unit has a sliding door that opens to reveal a docking port as well as connections for external antennas. 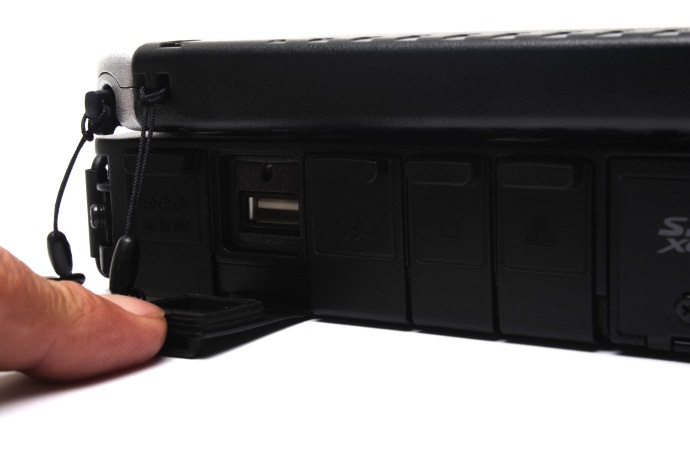 Using the Toughbook CF-19 as a tablet PC is accomplished by unlocking the screen, turning it around, laying it flat and locking it down. Because it's a thick notebook (and at 2.3kg it's a heavy one, too, by small laptop standards), it can be hard to hold as a tablet device. Its screen will accept input from a finger, from the supplied pen or from any other type of pointing implement that you wish to use. It's a single-touch screen and we found it to be responsive and accurate when it came to handwriting recognition. Apart from the awkwardness of holding such a thick and heavy device, writing and navigating the system in tablet mode proved to be useful. 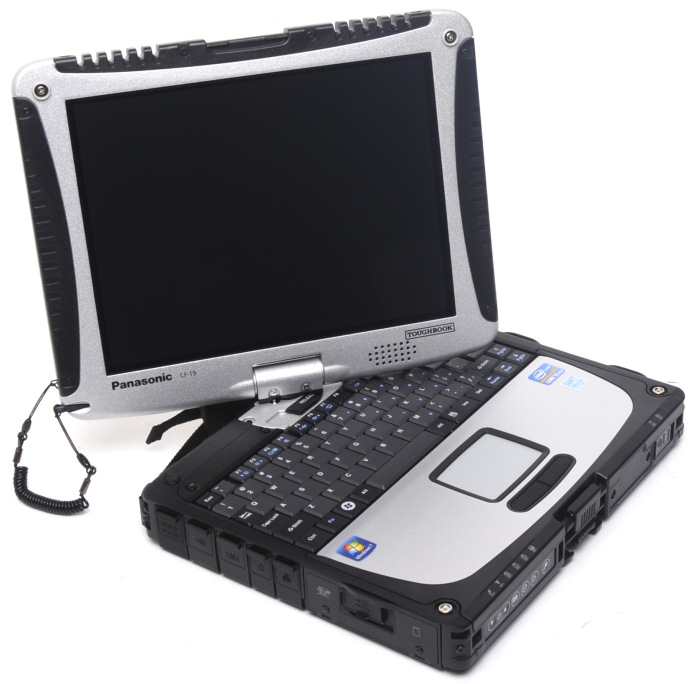 The swivelling screen in action.

When you're not using the Toughbook, the screen can be locked down by the clasp at the front and you can carry the unit from its inbuilt strap — it's similar to the case of a power tool, which is apt because the Toughbook is meant to be a tool. The exterior of the unit feels so solid that you sometimes just want to drop it or throw it for the hell of it, but it's officially rated at withstanding drops from 180cm. 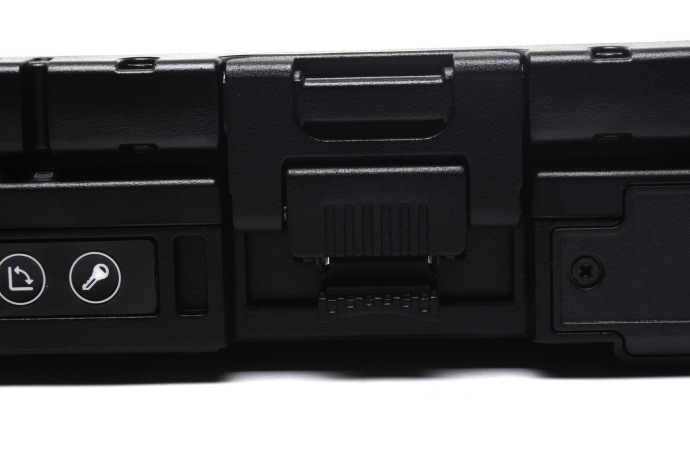 The screen can be locked securely in place whe nthe laptop is being transported.

Because it uses a conventional hard drive rather than a solid state drive (an SSD is optional), you still shouldn't take that as a license to drop the unit on a whim, but instead as an indicator that the notebook will most probably survive an accidental drop or two (or more, as it did for us). The hard drive (which was a Hitachi Travelstar HTS543232A7A384, 5400rpm, 320GB model in our test laptop) sits in a slot that's externally accessible. It rests in a cage that's lined with padding so that the jarring effects of a drop are minimised. If you do drop the laptop, hope that you miss your foot (or that you're wearing steal-capped boots) because the Toughbook is the only notebook we can remember to carry a label warning you of injury in case you drop it and get hit by it.

The rest of the Toughbook's configuration includes an Intel Core i5-2520M CPU, 4GB of DDR3 SDRAM and integrated Intel HD 3000 graphics. It's a notebook that will easily run most office applications and the CPU will provide enough grunt so that the notebook doesn't feel sluggish when multitasking. In our Blender 3D rendering test, the Toughbook took 51sec to complete our workload, which isn't the fastest we've seen from a notebook with a Core i5-2520M CPU — for example, the Toshiba Portege R830 took 40sec to complete this task using the same CPU. But the Toughbook is not purely about speed, it's about providing a notebook that can run field applications (and multiple ones simultaneously) without slowing you down. In 3DMark06, the unit scored 3118, which is respectable for a unit with integrated graphics.

You won't want to use this laptop too often for typing, and you especially won't want to use it for long typing sessions. Its keyboard is very cramped due to the 10.1in form factor and there are keys in awkward positions, such as the arrow keys, which are in non-standard positions. It's fair to say that we've reviewed netbooks that have been more comfortable to type on than this Toughbook. Likewise, the touchpad on this notebook requires a fair bit of pressure to move the pointer across the screen accurately and it's very small; these characteristics make it tiring to use for extended periods of time. 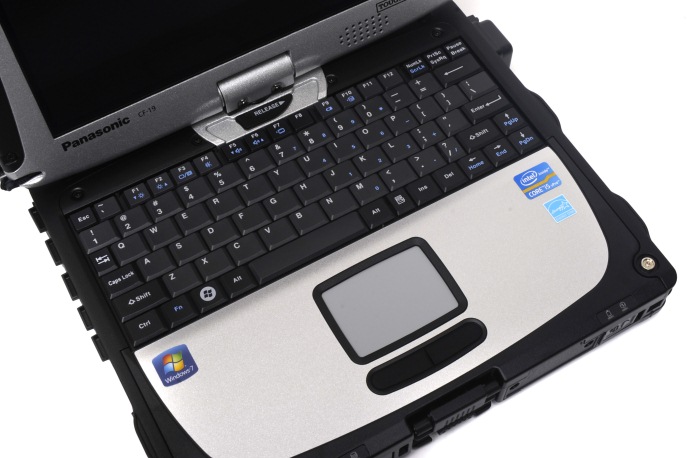 The small size of the unit makes it uncomfortable to use, especially for long periods of time.

It's important to note that if the Toughbook is being used heavily for extended periods of time, it will get very hot. There are no noticeable vents to keep the innards cool and all the heat generated by the CPU and the other components will eventually be felt through the chassis. At some points during our tests we feared the notebook might overheat, but it kept running normally, even while it was very hot. The manual states that it can operate in temperatures up to 50 degrees Celsius and with 80 per cent humidity (and down to -10 degrees and 30 per cent humidity).

As for battery life, this unit lasted us 3hr 28min in our rundown test, in which we disable power management, enable Wi-Fi, maximise screen brightness and loop an Xvid-encoded video. This is a decent result for a Core i5 laptop, but perhaps a little low considering the small screen. The screen itself doesn't look great in terms of colour reproduction and richness — it's very pale. The Intel Centrino Advanced-N 6205 Wi-Fi adapter supports 2.4GHz and 5GHz networks, and there is a mobile broadband module installed (F5521gw) so that you can get online independently of Wi-Fi or your mobile phone hotspot.

Overall, the Panasonic Toughbook CF-19 is perhaps a little too small to be practical. Its keys are small and the keyboard cramped overall, and its touchpad can be tiring to use. It could perhaps use an 11.6in or 12.1in form factor, which would make it a little more comfortable. Or, you could opt for the CF-31, which has a 13.1in screen, although it lacks the ability to be converted into a tablet. If the size of the unit doesn't bother you, and you just want a tablet-convertible notebook that will stand up to the elements while you use it in the field, then go for it.