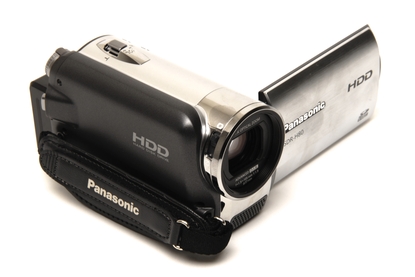 The Panasonic SDR-H80 is an excellent hard disk-based camcorder with plenty of user-friendly features. If you're in the market for an affordable standard-def camcorder, this model will not disappoint.

The Panasonic SDR-H80 is a standard-definition camcorder equipped with a 60GB inbuilt hard drive. Without a doubt, the standout feature is its astonishing 70x optical zoom lens, which is easily the most powerful zoom lens of any camcorder we’ve tested.

Other noteworthy features include an Intelligent Auto (iA) mode for automatic scene selections, inbuilt encoding software for Youtube uploads, face detection technology and an SD card slot for hybrid recording. What’s more, it’s very attractively priced at just $829. On the downside, image quality was a little on the soft side and the camcorder performed poorly in low lighting, but that’s a relatively small price to pay for such a cheap and versatile camcorder.

Rather than the 80GB hard drive that its name would seem to suggest, the SDR-H80 actually comes with 60GB of inbuilt memory. Nevertheless, this is still enough to net you between 18 and 72 hours of video before the hard drive fills up, depending on the video quality selected. These recording times can also be doubled via a 64GB SDHC memory card (although one of these babies costs more than the actual camera).

Like nearly every other gadget on the market, digital camcorders have enjoyed a style explosion in recent years, with the familiar black/silver finish supplanted by a range of fashionable colours. Unfortunately, Panasonic has opted to stick with drab traditionalism for the Australian version of the SDR-H80, which is black 'n' boring all the way. The old-school finish is unlikely to turn many heads, but at least it won’t be mistaken for a Fischer Price toy (Sony DCR-SR47, we’re looking at you.) We weren't fans of the protruding back battery either — it's an ugly design choice that many Panasonic camcorders suffer from.

With dimensions of 107x53x67mm, the Panasonic SDR-H80 is reasonably compact considering its inbuilt hard drive. As you’d expect, the inner mechanisms add a fair bit of heft to the device, which weighs in at 350g. However, we feel this actually works in the SDR-H80’s favour, as the added weight helps to counter against camera-shake. (This is further bolstered by Panasonic’s excellent optical image stabilisation system — a rarity in a camera at this price point.)

Unlike the Panasonic HDC-SD20-K, which benefited from a fancy LCD touch screen, the SDR-H80 sticks to a traditional joystick interface. As with previous Panasonic models, the stick has been mounted to the side of the foldout display, which requires you to use two hands during operation. This is obviously less than ideal for a compact camcorder, but we suppose it gets the job done well enough.

The menu layout is a bit of a chore to navigate, though it does offer a decent array of options. These include adjustable iris and shutter speeds, four white balance modes, manual focus, face detection, 16:9 and 4:3 recording, face framing (which is different to face detection, apparently), and the usual array of digital effects. As mentioned, the SDR-H80 also comes with Panasonic’s iA mode, which attempts to adjust settings on the fly to attain the best picture.

The Panasonic SDR-H80 also comes with a dedicated Web mode button. Rather than lowering the resolution as you’d expect, this function merely limits recording time to 10 minute intervals (the maximum length for a YouTube video upload). This saves you the trouble of having to trim your clips in an edit suite, but it also means you have to capture everything within that 10 minute window — if you go over by even one second, the footage won’t be recorded. This is plainly a bit rubbish. Furthermore, we’re not sure whether Panasonic should be encouraging people to upload unedited footage to YouTube — surely there’s enough crap on there already? Considering most computers come with free editing software, there’s really no excuse for submitting edit-free videos. Put some effort in, people!

For image capture, the SDR-H80 uses a solitary 1/8in CCD sensor with a gross pixel count of 0.38 megapixels. This is quite low even by entry-level camcorder standards, although it’s important to note that recent advances in technology have boosted the quality of smaller sensors. Consequently, the SDR-H80 performs markedly better than its specifications would suggest. In optimum lighting, our test footage exhibited accurate tones that were relatively free of grain. While images weren’t the sharpest we’ve seen, they should nevertheless satisfy the SDR-H80’s target audience of casual users. Naturally, footage tends to look best on a CRT television or PC screen, as the flaws become readily apparent on a high-definition TV. Unfortunately, the lack of an effective night mode means that this camera is ill suited to low lighting.

Before we wrap up this review, special mention really must go to the 70x optical zoom — the highest of any camcorder on the market. This hugely extends the shooting possibilities open to you, with distant objects brought into stark close-up without having to move a muscle. Naturally, you're going to need a tripod to attain smooth footage while zoomed in to the max, but that's to be expected. All in all, we were very satisfied with this camcorder, which offers a very solid performance for the asking price. The 70x optical zoom is almost worth an extra star all on its own.