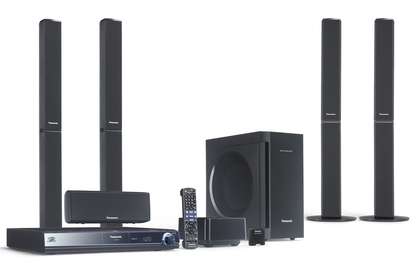 Panasonic's SC-BT207W home theatre system is a good choice if you're looking to team up a new big screen television with a separate sound system. It doesn’t have the aural abilities of more expensive home theatre setups, but for its size and price a reasonable amount of features are included.

The Panasonic SC-BT207W is a pre-built home theatre system that provides an easy way to add surround sound and Blu-ray disc playback to your flat-screen television. It’s got plenty of useful features for the digital enthusiast, and flaws in its sound quality only become apparent at high volumes.

Like most other home theatre systems currently on the market, the Panasonic SC-BT207W uses four tall-boy speakers and a wide centre channel accompanied by a squat subwoofer. While the amplifier and Blu-ray player are integrated into a single unit, the wireless transmitter for the rear speakers is separate — you’ll need to find somewhere to place it.

The front three speakers connect to the receiver using good old-fashioned speaker wire, and the rear speakers communicate via radio frequency (RF). This is a great bonus for anyone with a large living room — as it removes the need to run cables from the front of the room to the back (and trying to hide them under the furniture). Earlier RF speaker systems were criticised for poor sound quality, but Panasonic’s rear speakers are able to keep up with the quality of the wired front speakers.

Nonetheless, setting up the system is a hassle. Each tall-boy speaker comes in two halves that need to be clipped together, and then each cable must connected to the three front speakers and subwoofer. Schematically it's vital to make sure you work out where you want everything positioned beforehand — as it'll be a hassle to re-adjust the set-up and re-run the cable. Once it’s all in place, you’re ready to insert a Blu-ray disc and enjoy.

Sound quality from the speakers is average for a home theatre system, but it’s on par with our expectations from a pre-built system. The Panasonic SC-BT207W’s tall-boy speakers have good treble and reasonable mid-range frequency response, and the subwoofer provides a small amount of low-frequency enhancement. At low to medium volumes we found the system to be well suited to playing video games and watching Blu-ray movies — the latter is helped along by the system’s high definition audio codec support. The home theatre system can easily reach painfully high volumes, so it’s a good choice if you have a large living space.

Our chief concern with this speaker system comes from its performance at high volumes. In our tests when we cranked up the sound and put on some bass-heavy music or an action movie, there were a few occasions when the tall-boy speakers reverberated and rattled, distorting the audio. This is only a small performance concern, and it only occurred when we tested the system at volumes you wouldn’t normally use.

The system’s pop-out integrated iPod dock is a great bonus for anyone with a dock-enabled iPod such as the iPod touch or the new iPod Nano. You can either elect to control the player using its original controls or the Panasonic SC-BT207W’s remote control.

The Panasonic SC-BT207W is a good home theatre system for anyone with a large living room or a preference for wireless speakers. The audio quality is good for gaming or watching movies, while the inclusion of an iPod dock is a nice bonus.