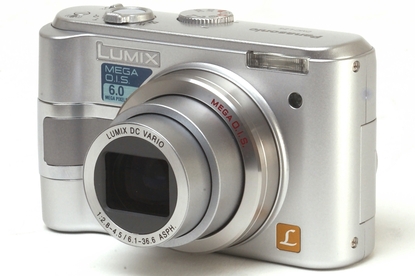 Panasonic's LZ5 is a rather chunky, extended zoom compact camera. As with past Panasonic models it offers a nicely rounded package, combining above average image quality with a great burst mode and a big zoom. While the size will be a limiting factor for some (this model is not easily stored in a pocket), for those who want a solid compact with a larger than normal zoom it's a good choice.

We recently looked at one of Panasonic's other new models, the FX-01, and while it performed reasonably well in our image quality tests it wasn't up to the usual standard from Panasonic. Thankfully, the LZ5 does a much better job. It still wasn't fantastic in all regards, but it posted solid scores and was only really let down by image noise.

Its sharpness result was the strongest element, scoring 1459 in our Imatest testing, which is well above average for a 6 megapixel model. We saw this score reflected in our test shot, with crisp, well defined edges. There was a little blurring in some corner areas, but this stems from chromatic aberration rather than a lack of sharpness. Imatest awarded the LZ5 a score of .72% for chromatic aberration, which is a very solid result, just a little below most of the competition. It is still prominent enough to have a visual impact, as illustrated in one of our outdoors test shots, but for the most part its presence won't be felt unless you're enlarging your shots a fair bit.

The sharpness test did however reveal quite high levels of undersharpening, at a level of 20%. All cameras have a sharpening algorithm to refine your shots, and so this refers to how well it compares to the standardized sharpening algorithm. 20% is quite a high score, and we saw its impact in our photographs, giving them a slightly unrealistic look. We only really noticed it when the shots were viewed at their native resolution, so for smaller prints it shouldn't be an issue.

The LZ5's performance in our colour test was also quite solid, although not as impressive as its sharpness score. Imatest awarded it 8.1 in the colourchecker test, which is a good result for a compact model. Reds and greens showed the most signs of inaccuracy, whereas blues and most shades of the greyscale spectrum were almost spot on. The colour balance was quite pleasing and should satisfy most users.

Sadly, the LZ5 did exhibit some signs of image noise. It wasn't particularly bad, but was definitely visible in our testing. Imatest confirmed this, giving the camera a score of .71% in this area. Most compacts achieve scores of .5% or thereabouts, so this model is a little behind the competition here. However it did scale well with higher ISO levels, achieving results of just 1.5% at its highest sensitivity of ISO 1600.

The nifty thing about the LZ5 is its increased zoom. It sports a 6X optical zoom, rather than the 3X usually found on compact models. Of course there is a downside to this; you sacrifice quite a bit in terms of size and weight. As you can see in our product shots, this is a chunky camera. It's slightly heavier than average, weighing 186 grams, and the thick jutting lens means it won't slip easily into your pocket.

Panasonic has gone with their standard navigation pad and function wheel control layout, and while it is quite functional it is also a little fiddly to use. The buttons are extremely small and the function wheel sits almost in the centre of the unit, above the screen, rather than to the right making it a bit of a stretch to use. Individually these are minor issues, but combined they slow you down.

The LZ5 comes sporting the standard Panasonic feature set, which is quite good by compact camera standards. There are whitebalance presets as well as a custom mode, ISO levels up to 400 (although it goes to 1600 if you use the 'High Sensitivity' mode), 15 scene modes and their OIS (Optical Image Stabilisation) technology. This works quite well to counteract shaking hands, and is particularly useful on a model such as this with a bigger zoom, where any sort of hand motion will have a much greater impact.

It also has an excellent set of continuous shot modes, one which takes 3.5 frames per second for up to eight shots, and another 2 frames per second for an unlimited number of snaps. For a compact model, having a 3.5 FPS burst mode is a great addition and combined with the larger zoom and high sensitivity mode makes it a great choice for basic sports photography.

In the rest of our speed tests the LZ5 was quite speedy. With a shutter lag of just .05 of a second and a reasonable 1.8 second shot-to-shot time, it's one of the fastest compacts we've looked at recently. This is only let down by the 2.3 second power-up time, due to the larger lens which takes longer to extend and focus.

All up the LZ5 is a competant digital camera. If you're after something with a larger than normal zoom, good features and above average image quality, you won't be disappointed with this model.