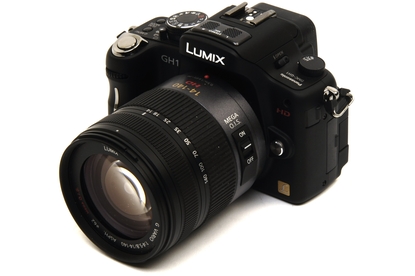 Panasonic's Micro Four Thirds line-up gets its second model in the Lumix DMC-GH1. It's a very good quality camera for taking stills and also does very well when shooting high-definition video. However, at $3299, it's quite expensive so only go for it if you absolutely must have the HD recording capability.

Panasonic's Lumix DMC-GH1 is a Micro Four Thirds–based advanced digital camera that accepts interchangeable lenses (much like a digital SLR camera). It has an absolute glut of manual and automatic features.

The Lumix DMC-GH1 is not as big as a traditional digital SLR camera, nor does it have a traditional optical viewfinder. Instead, it relies on an electronic viewfinder (called a LiveViewFinder or LVF). Its relatively compact size makes it a suitable for anyone who wants similar capabilities to a digital SLR but not the bulky size.

The Panasonic Lumix DMC-GH1 has similar dimensions to advanced compact digital cameras with big lenses. It's not as small as the Micro Four Thirds–based Olympus Pen E-P1. It also doesn't have the character of the Pen E-P1 (whose design is based on a camera released in 1959), but it does have a few more features, including a built-in flash and the LVF.

The Panasonic Lumix DMC-GH1 has a 12.1-megapixel Live MOS sensor (with a native 4:3 aspect ratio) that sits directly behind the lens mount. Light travels through the lens and hits the sensor directly, rather than bouncing off a mirror as it would in a traditional digital SLR. To frame your pictures you can use either the LCD screen (which flips out towards the left of the camera and also swivels) or you can use the LVF. When you use the LVF, the LCD screen automatically switches off.

We tested the Lumix DMC-GH1 with its kit lens: the Lumix G Vario HD 14-140mm/F4.0-5.8 ASPH./MEGA O.I.S. It's a mouthful of a name, but it gives the Lumix DMC-GH1 great versatility, with a 10x optical zoom that can shoot at a wide angle of 28mm and zoom in to 280mm (35mm equivalent). The lens has optical image stabilisation (image stabilisation is not built into the camera's body) and it does a great job of capturing wide and zoomed-in images with plenty of clarity and smoothness.

The Lumix DMC-GH1 takes very crisp shots as long as you focus accurately. It has autofocus (including continuous autofocus), focus tracking, face recognition, manual focus and spot focus modes. Manual focus mode blows up the centre of the image on the screen so that you can make delicate adjustments to focus, and reverts to showing the entire image on the screen once after you finish focussing. It takes a little getting used to, but it's effective. In spot mode, you can use the arrow keys to set the focus point almost anywhere on the screen. To access this function, you have to press the focus button on the back of the camera, and then the down arrow.

In video mode, the camera can shoot at a resolution of 1920x1080 (Full HD). The footage it captures won't be ultra-smooth if you take a lot of action and fast-panning shots. Footage looks choppy if you pan quickly, and this will be exacerbated if you use the maximum zoom. However, the camera is capable of capturing very crisp and vibrant video. It can focus automatically when you zoom, but it does take a few seconds to find its range. Recordings can be initiated in any mode by pressing the red button on the back of the camera. There is a port for an external microphone.

The Lumix DMC-GH1 takes excellent photos, but it lacks a little soul. Photos look almost clinically clean and too well rendered. In saying that, we'd be complaining if they were noisy and poorly defined. Colours looked good for the most part and weren't overdone; you can quickly change the contrast and saturation of the colours to suit your taste. Noise was not a problem in dim lighting up to ISO 800, and the camera has an ISO limiting function; you can set it so that it doesn't automatically use a high value when taking photos at night or indoors (or indoors at night).

A rotational dial near the shutter can be used to change the aperture and shutter values, and the ISO and white balance settings can be changed by pressing the buttons at the back of the camera. The shooting mode has its own ring switch around the mode dial, so you can quickly change from single-shot mode to burst mode, bracketing mode or timer mode. You also get a vast range of scene modes, an auto intelligent mode, and manual and semi-manual modes. This camera pretty much has it all. We especially like the dial on the left that allows you to change from manual focus to either of its autofocus functions.

The Panasonic Lumix DMC-GH1 is easy to use, and you get the hang of it quickly. It feels a little bulky and cumbersome considering it's using technology that's designed to enable smaller cameras to be built. However, if you're used to a digital SLR then this should be of no consequence. It will take super-crisp photos with vibrant colours and its video mode is very useful. Consider this camera if you're just getting serious about photography and don't want a huge digital SLR. It will supply you with a vast array of features and the ability to change lenses, and it will allow you to shoot HD video.