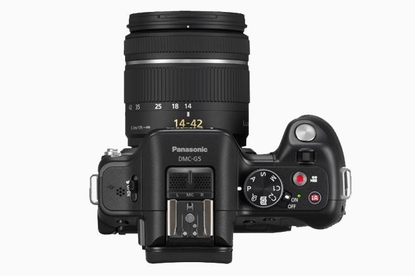 This is a great model to choose if you're after a small-ish camera that can take different lenses. Importantly, it has the ability to capture very clear images, and it's quite user friendly overall.

Panasonic's Lumix DMC-G5 is the successor to last year's Lumix DMC-G3. It retains many of the key features of that camera, such as the 16-megapixel Live MOS sensor, built-in electronic viewfinder (EVF) and flash, and, of course, a small body. It's a camera that you wouldn't think can take different lenses — it looks more like a super-zoom camera at first glance — but its Micro Four Thirds mount allows you to pick a lens for every situation.

Physically, a few things have changed on this camera compared to the G3. The overall size of the G5 is about the same as the G3, but the G5 has a different layout for its controls and features, and a slightly more bulky handgrip. One of the major changes is the placement of the shutter button, which is now located further along the grip, rather than at the top of the camera, and we think this makes it a little more comfortable to use. A zoom rocker has been added just before the shutter button, and this can be used to control lenses that are of the Power Zoom variety — it's especially useful for the 14-42mm zoom lens, which is small and difficult to use efficiently otherwise.

Other differences include a re-location of the focus-assist beam, new placement for the video recording button at the top, and a shiny 5-way controller on the rear instead of dedicated buttons. We think the 5-way controller feels and looks a little cheap and prefer the dedicated, soft buttons of the old model. The Q.Menu button has been moved up next to the EVF and next to it is a function button that can also be used as a focus and exposure lock. One of the more subtle differences is the location of the control dial to the very corner of the camera chassis; it feels a little unnatural as you have to move your thumb further to the right to use it.

One of our criticisms of the G3 was that it didn't have a sensor that could detect when you were using the EVF and switch off the LCD screen automatically — you had to press the EVF/LCD button. On the G5, a sensor has been added so that you don't have to press that button when you want to make use of the EVF instead of the screen.

The screen is decent and it has some touch functionality that allows you to tap on the screen to select a focus point, swipe to browse through photos and to changing menu settings. However, it doesn't provide a true what-you-see-is-what-you-get image. For example, Micro Four Thirds cameras from Olympus can show you a scene on the screen in exactly the way it will be captured before it is captured, depending on the exposure settings you have selected. The G5, and the G3 before it, doesn't show you the scene accurately until you have taken the photo, even in auto mode. If you use manual mode, on-the-fly adjustments to the settings won't show up on the screen before you take the shot. You'll have to make do with the exposure meter and histogram.

Using this camera is not a difficult undertaking, but you do have to get used to its menu system and familiarise yourself with all of the controls. We like the menu system, which looks neat and logical in its layout, and which also includes scrolling descriptions of all the menu items.

You can take photos by using the scene or art modes, or you can take photos with settings that you have selected yourself in manual, aperture priority, shutter priority or program mode. There is no plain auto mode on the dial, but you can make use of the intelligent auto mode, which has a dedicated button to the right of the dial. It's useful because it allows you to quickly switch to auto mode regardless of the mode the dial is set to, and then allows you to go back to that previous mode dial setting — it also lights up so that you can't easily forget when auto mode is enabled. In the manual and semi-manual modes, the aperture and shutter values can be manipulated through the control ring (it can be pressed to toggle between these functions), and there is a dedicated ISO button as well as dedicated focus mode and white balance buttons.

The focusing performance of the camera was swift and accurate in our tests, in which we used the 14-42mm Power Zoom lens. However, the default setting is for the area that you are focusing on to be zoomed in on the LCD screen, and this can be a little off-putting, especially when the camera moves slightly or when you want to move the focus point and have to re-focus. However, it does come in handy for getting a close look at your focus point when using manual focus.

Speed wasn't an issue for us when using this camera. Its shot-to-shot performance was swift, and it could handle bursts of up to 15 shots before slowing down dramatically. We can see it being useful for all types of photography, including sports and action photos, because of this.

The image quality of the G5 is impressively good, just like the G3 it replaces. Images come out very clear and can be used just as easily for printing as they can online display through social media sites. The high resolution, coupled with the clarity, allows you to crop images closely without losing much in the way of detail, but this will also depend on the ISO value that was used to capture the image and also if you got the focus right where you wanted it. We found images to be usable even up to ISO 1600 in most scenarios. However, if you plan on shooting in dim lighting conditions, you'll still want to use a lens with a big aperture and a more moderate ISO value. Image stabilisation is built in, and we found success shooting at shutter speeds as low as 1/8th of a second, although we did have to hold the camera very still and take multiple shots before landing a clear one.

Colours won't over-processed in JPEG mode and we liked the overall tone of the captured images, which to us looked neutral. In-camera colour adjustment is possible, and you can also make use of the built-in art modes, too, which are handy if you want to be extra creative but don't want to use image editing software afterwards. If you're an advanced user, you can switch the camera to RAW mode to get the results you're after. The camera can also be used to capture Full HD video, and it does a good job of it, too, as long as you don't move the camera around too much, which can cause the image to look a little jumpy.

Overall, this is a worthy camera to consider if you're after a small, yet well featured and versatile model that can take different types of lenses. Its usability is high and its image quality is clear and enjoyable to view on a big-screen TV or in print. Some of the physical aspects of the camera could be better, such as the control buttons and the placement of the mode dial, and we also wish the effect of exposure settings would show up live on the screen prior to taking a shot.

• If you want more manual features and even better image quality in a compact camera, check out the Sony RX100.

• If you're looking for a new digital SLR, the Canon EOS 650D is an entry-level model that's also very fast.

• If you want a funky-looking interchangeable lens camera, it doesn't get much funkier than the Pentax K-01.

• Panasonic's Lumix DMC-TZ25 and DMC-TZ30 are both good choices if you're after a small camera with a big lens and great image quality.

• Bring Wi-Fi to your non-Wi-Fi camera with Eye-Fi.