The DMC-G1K from Panasonic shares more in common with a digital SLR camera than a typical compact digital camera. 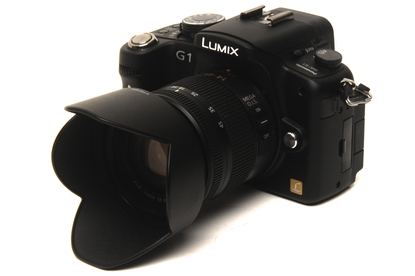 It's not a traditional D-SLR but the LUMIX DMC-G1K is definitely as versatile as one, and much more compact. It's easy to use, and its images are very sharp. Give it a go if you want something that won't compromise your mobility yet will give you the flexibility to change lenses.

By using what is called the Micro Four Thirds system, Panasonic has taken the D-SLR concept of removable lenses and combined it with the convenience of an advanced compact camera. The end result is the LUMIX DMC-G1K, which is as thin — if not thinner — and as wide as many advanced compact cameras on the market.

The biggest advantage of the G1K is that it can be used with interchangeable lenses. In this respect it's a D-SLR for people who don't want the bulk of a traditional D-SLR. The Micro Four Thirds system enables manufacturers to make smaller camera bodies by eradicating the mirror box used in the traditional Four Thirds system.

Instead of an optical viewfinder, the G1K employs an electronic one — called LiveViewfinder, or LVF — as well as an LCD screen. Using either the viewfinder or the 3in LCD screen to frame your shots is very easy, and both let you see the entire shot in the same way that the camera will take it. A sensor on the viewfinder detects when it is being used and shuts off the LCD screen; it's definitely more convenient than remembering to press a button.

The LCD screen is on a swivelling hinge that allows you to take photos at awkward angles, but it does take some getting used to. For example, it can be tricky to frame a shot properly when the screen is open to the side and at an angle. It can flip around, which is handy when you want to take a creative self-portrait (or maybe just an awful MySpace one).

A dial on the hand-grip allows the aperture and shutter to be changed quickly when the camera is in aperture, shutter, or full manual modes. Alongside the rotational mode dial at the top of the body there is a ring-selector that quickly lets you change the drive mode from single shot to burst mode and to bracketing mode. A dial on the left-hand side of the body lets you choose between manual and autofocus modes. The manual focus mode is difficult to use as it zooms into the image, but it is flexible: it allows you to select a specific point (up to 23 areas) on which to focus. You can definitely get creative with it.

A 12.1-megapixel sensor is used to capture some of the crispest shots we've seen from an advanced compact camera. Our test shots were crystal clear and didn't suffer from noise — even at ISO 800 there was barely any noticeable noise. We couldn't notice any major fringing or haloing in high-contrast areas. Our only gripe is that colours were a little subdued, and that the included 14-45mm (28-90mm film camera equivalent), f/3.5-5.6 lens slightly distorted our images at the widest zoom point. But our overall impression of this camera is that it's definitely the one to go for if you want clean and crisp images and neutral colour tones.

Depending on the lens you use, the camera will also do a good job of macro shots. Portraits and close-ups can be rendered with a blurry background, but the bokeh effect we noticed with our 14-45mm lens wasn't overdone and objects in the background were still recognisable.

Indoor and outdoor shots were exposed perfectly when using aperture priority mode, but the camera also has an intelligent auto mode that can be used if you don't want to fiddle with any settings. There is optical image stabilisation built into the lens, and this kept blur to a minimum when shooting at shutter speeds less then 1/20th of a second while holding the camera.

The camera's battery doesn't last as long as a traditional D-SLR would, as it has to power the LiveViewfinder and LCD screen. You'll probably have to charge it after a day's use, though this will depend on your usage pattern. It's also worth mentioning that it's a quick camera, as it's ready to shoot as soon as you flick the on-switch; you don't have to wait longer than a couple of microseconds between each shot, either. You may be disappointed at the lack of a video mode, for which a conventional advanced compact camera will be more suitable.