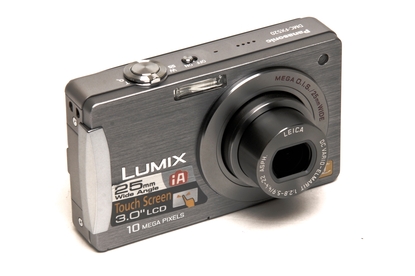 The DMC-FX520 is an advanced camera that takes rich, clear photos and has the additional option of manual focusing using the touch screen. It’s pricey, but you get plenty of advanced features for the price.

The Panasonic DMC-FX520 is a 10.1-megapixel camera with 5x optical zoom and the added functionality of a 3in touch screen. It's a heavy but compact camera, especially considering the wide range of features and shooting modes that are offered. It's relatively user-friendly and the touch screen is a fun feature that's both useful and easy to use.

The camera has a dark, brushed metal fascia offset by the shiny silver lens and surrounds. The rear of the camera houses most of the controls, which are quite small and might be difficult to use for those with larger hands. The On/Off switch is one of the main offenders — while it moves solidly, it's hard to push without using a fingernail.

Instead of using an arrow pad like most compact digital cameras, the DMC-FX520 uses a four-way joystick. This is located in the lower right corner of the camera body, which means it's quite easy to reach while holding the camera normally. Still, it's fiddly and complicated to use, again requiring the tip of a fingernail to operate. We also found it was easy to press the button by accident, causing it to enter the advanced options menu.

The joystick may be troublesome to operate, but the touch screen is intuitive. It's supplementary to the standard controls and is only activated when a physical button is pressed. The touch screen is used to navigate most of the on-screen menus, which allow you to choose from a wide range of shooting modes. Panasonic supplies a small stylus that looks quite like a guitar pick and can clip on to the camera's wrist strap. You can either use the stylus or a fingertip, as the on-screen menu and buttons are large enough for either.

Plenty of features are offered in the DMC-FX520, including red-eye correction and face detection. The face detection function is able to detect up to 15 faces within a single frame and will attempt to adjust exposure and focus settings when needed. This works well when used with the camera's novel autofocus tracking system.

Autofocus tracking is enabled and controlled using the touch screen. It's extremely simple to use; all that's required is to select the autofocus tracking mode, hold the camera still and touch the screen on the area to be focused on. The camera will then adjust the focus to suit that area, even when in the corners of the frame. Even while panning and moving the camera significantly, the autofocus tracking will maintain its lock on a subject until it leaves the frame. While it doesn't replace DSLR-style manual focus, this system is a decent runner-up.

The DMC-FX520 has a surprisingly fast autofocus system; it's more responsive than most other cameras we've tested. The camera starts up in less than 2sec, and an image can be captured after another second.

In our testing we ran a series of images through the Imatest photo analysis suite. Colours were consistently accurate from the DMC-FX520, though slightly over-saturated on default settings. No noticeable chromatic aberration could be seen, and there was no focus softening around the edges of images — a common problem with high-zoom compact cameras.

When examining photos closely — enlarged to 200 per cent — there was a small amount of compression artefacting visible. Variable levels of compression are to be expected from any camera that saves files in the JPEG standard, although this wouldn't be an issue for a casual photographer. Macro shots and digital zoom photos are also handled competently, though slightly soft. There's no obvious artefacting even at the highest digital zoom levels, which is a credit to the DMC-FX520's image processing.

As a standard point-and-shoot digital camera, the DMC-FX520 works well. With the addition of the touch screen and autofocus tracking system, it becomes a good compromise for those who want manual focusing but don't need a digital SLR.