The Panasonic HDC-SDT750 is a bold step forwards into 3D videography. Perhaps more importantly, it doubles as an excellent 2D camcorder. If you own a 3D TV, it represents a very logical purchase.

The Panasonic HDC-SDT750 is the world's first consumer-targeted 3D camcorder, following in the footsteps of the professional-level Panasonic AG-3DA1E. Like its prohibitively expensive stablemate, the Panasonic HDC-SDT750 uses a detachable 3D conversion lens that records left-eye and right-eye images simultaneously to produce stereoscopic video. This video can then be viewed on a 3D HD TV, such as Panasonic’s Viera TH-P50VT20A 3D plasma TV (you can also view movies on a 3D-capable monitor).

[Compare and contrast the Panasonic HDC-SDT750 with other Full HD camcorder reviews on PC World.]

In addition to taking 3D video, the Panasonic HDC-SDT750 is a superb camcorder in its own right. It is capable of taking stunning Full HD video in all but the dimmest environments, with plenty of manual modes and features for hands-on videographers. (A manual servo ring is provided on the lens barrel.) On the downside, the 3D interface definitely takes some getting used to, especially if you're used to point-and-shoot camcorders. The limited 3D recording options is also a bit regrettable. Nonetheless, the Panasonic HDC-SDT750 marks an impressive first foray into the realm of 3D movie-making.

The Panasonic HDC-SDT750 looks pretty indistinguishable from any HD camcorder on the market — until you attach the 3D conversion lens, that is. Indeed, the lens attachment is almost as big as the camcorder itself, measuring a whopping 88x56x73mm. This protruding front-end lends the HDC-SDT750 a bizarre and eye-catching appearance. It is sure to illicit inquisitive comments from passers-by — which is exactly what the owner of a 3D camcorder craves. 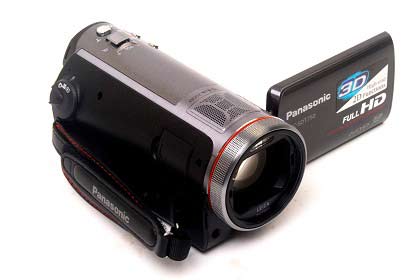 On the downside, the 3D attachment’s size meant we were constantly paranoid it would drop off and break. It just seems too chunky to be properly secured. Consequently, we were terrified of bumping the thing against a table or doorway and sending it spiralling to its doom. (For the record, it remained firmly in place throughout testing. Phew.)

The Panasonic HDC-SDT750 shares the same basic specifications as its 2D-only predecessor, the Panasonic HDC-SD700. Both camcorders come with a 1/4.1in 3MOS chipset, a 35mm wide-angle LEICA Dicomar lens with 12x optical zoom and an effective pixel count of 9.1 megapixels. According to Panasonic, the HDC-SDT750 boasts greater noise reduction than its predecessor, along with a revamped optical image stabiliser (the latter only works in 2D mode though). Other highlights include a 3.5mm microphone jack, an accessory shoe and a secondary viewfinder.

To record still images and video, the Panasonic HDC-SDT750 relies on removable flash memory in the form of SD/SDHC cards. It is also compatible with SDXC — a new high capacity format with a potential storage capacity of up to 2TB. At present, only 64GB SDXC cards are available, but that’s still enough to net you up to 27 hours of Full HD video (or up to 829,000 still images.) Annoyingly, the Panasonic HDC-SDT750 does not come bundled with an SD card, so you'll need to source one yourself before you can start capturing video.

Calibrating 3D images is a tricky process involving four separate steps. Once the lens attachment has been properly fastened (an irksome task in itself), you need to adjust the position of the lens using three separate dials. The trick is to get both stereoscopic images perfectly aligned on a vertical and horizontal axis. 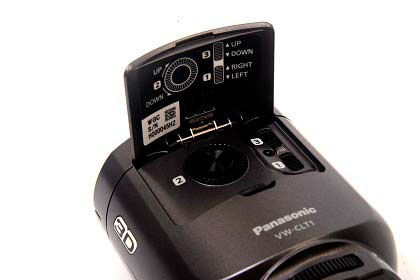 We think this may present a steep learning curve for some users, particularly those who’ve been bred on entry-level camcorders. This isn’t helped by an inscrutable manual that goes out of its way to confuse people (the 3D lens diagram is mislabelled, for example). That said, the process becomes second nature with a bit of practice — which is just as well, as you need to recalibrate the camera every time you detach the lens.

The HDC-SDT750's touchscreen LCD shows 3D footage in regular 2D. On one hand, this means you can watch and enjoy your footage in-camera, but on the other hand, you won't know if it's been properly calibrated until you get home and view it on your 3D TV. (Mind you, the alternative would involve wearing silly glasses in public or footing the bill for an expensive Nintendo 3DS-style screen.)

When shooting in 3D, the Panasonic HDC-SDT750 shuts off the majority of controls, including manual focus and zoom. You're basically relegated to point-and-shoot duties, which is ironic given the complicated setup. Regrettably, the camcorder cannot be used to capture 3D photos, as seen on digital cameras such as the Fujifilm FinePix Real 3D W3. When you consider that the afore-mentioned Fujifilm camera can capture 3D video, the omission becomes doubly frustrating. Hopefully the next iteration will let you capture 3D stills directly to SD cards.