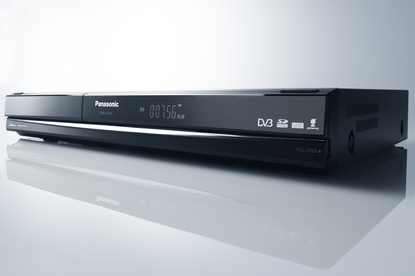 The DMR-XW300 is a highly functional digital video recorder, with few downsides apart from imperfect DVD playback and a high price tag. If you’re looking for incredible flexibility in a single unit, you can’t go wrong here.

Panasonic's latest flagship digital video recorder, the DMR-XW300, offers a wide range of functionality and an intuitive interface. Recording to DVD or hard drive is simple, and playback is equally trouble-free.

As the most expensive model in the Panasonic line-up, it has two high-definition digital tuners and 250GB of hard drive space for direct recording of television. It can store 36 hours of high-definition content or 66 hours of standard-definition content in the default recording format, and can also record and play back Dolby Digital 5.1 surround sound from TV broadcasts. When switched to Extended Play recording mode, you're able to fit a massive 441 hours of video.

Setting up the device is simple, with an HDMI link and a power cable the only connections necessary. Component, composite and SCART outputs are also included for older televisions and sound systems, as well as composite video and RCA audio input. Once the DMR-XW300 was hooked up and powered on, there was a relatively short 20sec delay before live TV was displayed. Flicking between channels was slightly faster than other PVRs we've looked at, only taking around 2sec in most cases.

Recording is equally impressive. Only a single button press is needed and the currently watched show will be saved on the fly. Time-shifting is also present and was well-integrated into the interface. Since there are two tuners, you can switch to another channel while recording. The DMR-XW300 is even able to record two HD channels simultaneously — and you're able to watch a DVD while doing so. It's unlikely that you'll need this amount of flexibility often, but it's a definite bonus.

We recorded a half hour program of HD television, and without reading the manual were able to quickly edit out commercial breaks with a decent degree of accuracy. After that was done, it was a simple task to copy the program directly to DVD.

The DMR-XW300 is able to play back DVDs as well as digital television, and it does so capably. We did notice a bit of noise and fuzziness while playing back The Matrix, but overall the 1080p up-scaling was decently executed. There's also a port for plugging in SD cards on the DVR's front, allowing you to view AVCHD videos recorded on camcorders like the Panasonic HDC-SD9.

Another feature that Panasonic is touting as a bonus is their VIERA Link universal control system for all products plugged in via HDMI. We found VIERA Link incredibly simple to use. It's the best implementation we've come across so far, and allows for a wide range of devices to be controlled using only the TV's remote control.

The unit has a slim design that's attractive and unobtrusive, with the DVD player and SD card slot smoothly integrated. The on-screen interface is easy to navigate and will be instantly recognisable to anyone who has used a digital video recorder or set-top box before.

The remote control fits a large number of buttons onto a small area and can be a little daunting. The buttons are clearly labelled, however.

The DMR-XW300 is a great choice if you're looking to purchase an easy to use, highly functional digital video recorder.