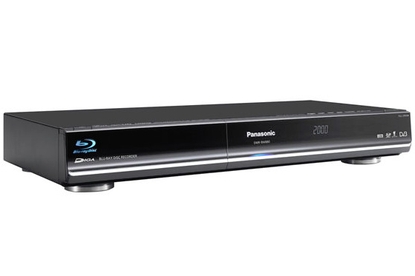 The Panasonic DMR-BW880 has almost every feature you could hope for in a media player. The 500GB hard drive can store plenty of compressed video recordings (which can also be copied to Blu-ray), its network support allows Internet features and media sharing, and, best of all, it's cheaper than the model it replaces.

The Panasonic DMR-BW880 is a Blu-ray disc recorder with a 500GB internal hard drive and twin high-definition digital television tuners. It builds upon the older Panasonic DMR-BW850, adding DLNA media sharing over a home network, but we would have liked to see more extensive Internet features. It is several hundred dollars cheaper than the older model as well, which makes it a better proposition for buyers searching for an all-in-one media player.

The Panasonic DMR-BW880 looks similar to the DMR-BW850, with a few styling tweaks to bring it into line with the company’s 2010 televisions. It is simple to set up — most users will opt for the single HDMI port, although analog component, S-Video and composite connections are available as well. To use all the DMR-BW880’s features you’ll also need to connect the antenna connection for the twin internal HD tuners and a cable to the Ethernet port for Internet and home network access.

Using the Panasonic DMR-BW880 is easy. It may take a while to start up and to access certain menu functions, but generally the user interface is intuitive and settings are easy to change. You shouldn’t need to delve into the user manual too frequently.

The biggest difference between the Panasonic DMR-BW880 and the older DMR-BW850 is the inclusion of DLNA network sharing. If you’ve got your home networked, you can watch recorded television or media files that are stored on the DMR-BW880 on any DLNA-compliant media device on the network — including media streamers, desktop PCs and laptops. This is a very useful feature for tech-savvy households, as it allows content stored on the DMR-BW880 to be distributed to multiple devices simultaneously. You use the SD and USB ports of the Panasonic DMR-BW880 to access home movies and pictures on your digital camera or camcorder, making becomes a useful entertainment hub.

The Panasonic DMR-BW880 has the same Viera Cast Internet features as its predecessor, with YouTube, Picasa, stocks and weather services. We were impressed by the wider range of Viera Cast features on the Panasonic VIERA TH-P50VT20A 3D plasma television, so to not find similar Facebook, Twitter and Skype functionality on the DMR-BW880 was disappointing. It’s possible extra features will be added by firmware updates, which should be easy given the Panasonic DMR-BW880’s constant Internet connection.

Overall, the Panasonic DMR-BW880 is a well-rounded and competent product. It doesn't offer a lot more than the DMR-BW850 it supersedes, but it is cheaper — and that’s never a bad thing.

According to Panasonic's environment policy its products are produced worldwide by factories certified to meet ISO 14001 environmental management standards. The company's Green Plan 2010 can be read on its Web site.