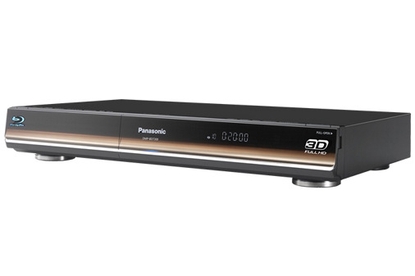 The Panasonic DMP-BDT300 is a 3D-enabled Blu-ray disc player that's quiet and fast, and it can access the Viera Cast suite of Internet features as well as media files from your home network. Apart from its expensive price, it is an excellent device.

The DMP-BDT300 is an attractive device, but its styling is at odds with the Panasonic Viera TH-P50VT20A 3D plasma TV we set it up next to. A smooth, highly polished fascia hides the disc tray and single-line display. Around the DMP-BDT300's rear, you can find the usual component and composite analog video connectors, USB and Ethernet ports as well as two HDMI sockets. This makes it easier to connect the Panasonic DMP-BDT300 to an external home theatre system or A/V receiver as well as directly to a 3D television — since only a few receivers support HDMI 1.4, connecting the DMP-BDT300 to the television via most current receivers will not allow 3D content to be displayed. Having two HDMI ports neatly solves this issue.

Strangely enough the Panasonic DMP-BDT300 doesn't have any internal flash memory, which is required for the player to access BD-Live content. You'll need to purchase an SD card and plug it in. On the plus side, the DMP-BDT300 does support playback of AVCHD video and JPEG picture files — which is convenient if you're using a card out of a digital camera or video camera.

The Panasonic DMP-BDT300 starts up quickly and quietly. Its Quick Start mode means the device draws more power in standby than if it were completely switched off, but this eliminates long start-up times for movies. If you're used to switching your Blu-ray player on and making a coffee while the disc loads, this is a useful bonus. The DMP-BDT300 draws a reasonable 32 Watts during operation according to Panasonic, and HDMI-CEC support means turning off your television will send the Blu-ray player into standby as well.

If you connect the Panasonic DMP-BDT300 to your home network, you'll gain access to DLNA media streaming from a compatible PC (which requires Windows 7 to be installed), as well as Viera Cast Internet services. While we were disappointed that the Viera Cast services were limited to YouTube, Picasa and weather services — the TH-P50VT20A 3D plasma TV is able to access Twitter and Skype — it's a useful extra for passing the time. DLNA media streaming is a bigger drawcard if you've got a photo or music library saved on your desktop PC or laptop.

The high price of the Panasonic DMP-DBT300 is in part justified by its ability to play 3D Blu-ray discs. If you're hell-bent on being on the bleeding edge of home entertainment tech then your choice is limited to this Blu-ray player or a handful of others like the Samsung BD-C6900. At the moment we believe they're unnecessarily expensive given the tiny amount of 3D Blu-ray video content available.

If you can get past its price tag, or can justify purchasing it and waiting for more 3D content to be released, the Panasonic DMP-BDT300 is an excellent Blu-ray disc player overall.