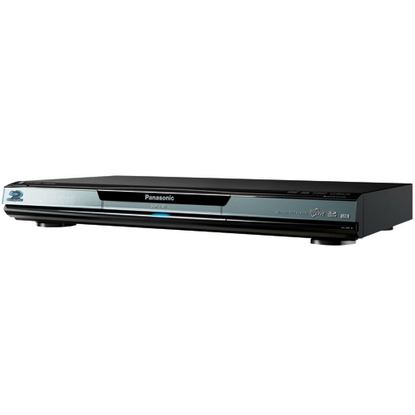 The Panasonic DMP-BD80 is a top brass Blu-ray player with a respectable brace of bells and whistles. If you specifically require 7.1ch audio and DivX playback, it's pretty hard to beat. Otherwise, plump for its cheaper stable mate, the DMP-BD60.

The Panasonic DMP-BD80 is a top brass Blu-ray player with a respectable brace of bells and whistles. If you specifically require 7.1ch audio and DivX playback, it's pretty hard to beat. Otherwise, plump for its cheaper stable mate, the DMP-BD60.

The Panasonic DMP-BD80 is a high-end Blu-ray player packed with oodles of features. Some of the standouts include inbuilt Picasa/YouTube browsing, an SD card slot for easy media file access, 7.1ch surround sound, an optical digital audio output and advanced 1080p upscaling. Having been recently discounted from $719 to $549 (RRP), the Panasonic DMP-BD80 represents good value for money. However, you might be better off buying the Panasonic DMP-BD60 — a similar model that’s even more affordable.

In most ways, the Panasonic DMP-BD80 is identical to the cheaper DMP-BD60. For a premium of $160, Panasonic has thrown in DivX playback and multichannel analog audio outputs — otherwise, both models provide the same core components and functionality. If you're not an avid audiophile and rarely muck around with compressed video files, then there's very little reason to stump up the extra cash: go for the Panasonic DMP-BD60 instead. That said, the DMP-BD80 remains a top-notch Blu-ray player that excels in most areas.

Panasonic has taken an "if it ain’t broke, don’t fix it" approach to the DMP-BD80’s design. We stacked it on top of the Panasonic DMP-BD60 and were hard pressed to tell them apart (the DMP-BD80’s extra ports at the back were the only giveaway). Both models are as sleek, glossy and attractive as each other — though it would have been nice to have an extra badge or something. Measuring a relatively compact 49x430x249mm, the Panasonic DMP-BD80 Blu-ray player should fit anywhere you want it. A mirrored faceplate covers the tray-loading disc drive, while a flip out door conceals the playback buttons, SD card slot and USB port. The power and eject buttons are large and well-placed; this allows lazy parents to offload disc-swapping duties to their tots (a big plus).

The programmable remote is up to the usual Panasonic standard. That is to say, it’s large and responsive but needlessly obtuse. With the exception of the directional pad and OK button, most of the controls are difficult to distinguish in the dark due to their similar size and shape. This can get frustrating if you’re fond of watching movies with the lights off (the buttons aren’t backlit either). To be fair, though, the same charge can be laid at the feet of most Blu-ray remotes.

The on-screen menu is identical to the DMP-BD60's. Some menu options are a little complicated and may require you to consult the manual, but for the most part you can simply leap right in, with a host of handy on-screen explanations. This includes a handy playback information window, which displays details about the current disc being played (native resolution, frame rate, video codec, etc.) All up, we had very few issues with the DMP-BD80’s interface — it gets the job done and looks good to boot.

As mentioned, the Panasonic DMP-BD80 comes with both a USB port and an SD memory card slot. The card slot is able to receive AVCHD video and photos, while the USB port handles JPEG and MP3 files. You can also play DivX files directly from the USB drive or CD/DVD.

To test the Panasonic DMP-BD80’s playback performance, we hooked it up to a 50in Pioneer KURO PDP-C509A307112 plasma TV and watched a handful of Blu-ray movies as well as some standard-definition DVDs. In both cases, the DMP-BD80 produced vibrant, razor-sharp images with plenty of intricate detail. The player’s P4HD processing chip is capable of processing more than 15 billion pixels per second (it says here). The Panasonic DMR-BD80 also did a great job of upscaling standard-definition video to 1080p.

The DMP-BD80 required around 50 seconds of prep time before it began playing a disc — a little on the sluggish side. Once the disc was playing, skipping chapters produced a slight lag, though nothing we couldn’t live with. Pausing, on the other hand, seemed immediate.

In conclusion, there is a lot to like about the Panasonic DMP-BD80. While it doesn't lift itself head-and-shoulders above the DMP-BD60, the extras that are on offer make for a better overall product.