Instant messaging on the go 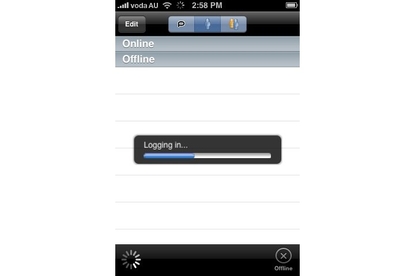 Palringo offers a comprehensive instant messaging solution for the iPhone with few drawbacks. Due to the device's soft keyboard, it is unlikely to gain the same popularity as its desktop equivalents, but it is a viable choice for those who need instant messaging on their handset.

Instant messaging (IM) was inevitably going to be a feature of the iPhone 3G experience — the combination of 3G, a soft keyboard and a brilliant colour screen was too good to ignore. With the Apple-endorsed AIM application the only competition, instant messaging service Palringo has released an iPhone application that offers third-party support for eight popular instant messaging protocols as well as its own. It's free and has a decent interface, but minor bugs and the iPhone's relatively slow keyboard may frustrate people.

Users of the original iPhone could use the third-party IM application Agile Messenger — provided their unit was jailbroken. Apart from a different interface and better protocol support, Palringo doesn't offer too much more than Agile Messenger. However, Agile is currently unavailable for the iPhone 2.0 platform.

Users are required to register an account with Palringo's proprietary instant messaging service prior to use the application. Once this is done, Palringo allows connection to eight other protocols: Windows Live, AIM, Gadu Gadu, iChat, Jabber, Yahoo! Messenger, ICQ and Google Chat. Unfortunately, there's no way to simply disconnect from an individual service; users must either quit the whole application or delete the protocol.

Contacts are amalgamated into a single list, which can cause Palringo to slow if you have a large number of contacts. Thankfully, you can delete and add contacts from within the program.

Multiple message windows are supported, but in a rather unique style. Rather than tabs, Palringo treats individual conversations as separate windows that can be accessed by pushing the Palringo home button on the bottom left hand corner of the window.

This feature cuts down on interface clutter, but it does expose a major bug in the application. When a user opens a second conversation window, the first window no longer allows the user to send messages. This is easily remedied by closing and reopening the conversation, but the bug's existence demonstrates the application's relative immaturity.

There is another hurdle Palringo faces: the iPhone's soft keyboard. Any iPhone user will tell you that the keyboard is intuitive and fairly fast for a software keyboard, but it doesn't compare to hardware keyboards. For sending an SMS the soft keyboard is sufficient, but for fast instant messaging needs, the iPhone simply can't compete.

Palringo provides a useful instant messaging application for those who need their MSN account on the go. The application isn't perfect, but given that it's free, the only thing holding back its popularity is ultimately the iPhone itself.