The Palm Pre Plus and the webOS platform are far from perfect. The Pre's hardware feels dated compared to the latest smartphones; it's slower and it's also missing some basic features. Despite these issues, webOS' handling of multitasking and notifications, as well as it's elegant interface, are appealing. It's a real shame Palm no longer has a presence in Australia.

The Palm Pre Plus is a smartphone that unfortunately never made it to Australia. Currently sold in the US through Sprint, Verizon Wireless and AT&T, the Pre Plus runs the webOS operating system, which was touted as a serious threat to the iPhone when it first launched in 2009. More than a year later, Palm has been taken over by HP, and webOS hasn't been the huge hit many expected. However, the OS still has a future, with HP revealing that it will launch a webOS tablet in 2011 to take on Apple's iPad and Samsung's Galaxy Tab.

The Palm Pre Plus is not officially sold in Australia, but a model that will work on Telstra's Next G network can be purchased through online retailer MobiCity. The original Palm Pre, which will work on all Australian networks, is also stocked.

The Palm Pre Plus distinguishes itself from the wealth of other smartphones on the market with a body that looks like a large pebble. It has glossy black plastic on the front and matte black plastic on the rear, and it possesses sleek, well rounded-edges. The angled-slider design is a far cry from Apple's iPhone 4, which has a flat case with sharp edges. Users with smaller hands or those who prefer a curved handset will appreciate the Palm Pre Plus' design.

The Palm Pre Plus resembles a compact, glossy pebble.

The Palm Pre Plus slides up to reveal a full QWERTY keyboard. The keys themselves are square shaped with rounded edges and have a glossy finish. Like Palm's previous Treo devices, the Pre Plus is relatively easy to type on once your fingers get used to the layout — those with larger fingers will find it a bit cramped though, and the raised edges surrounding the keyboard can dig into your fingers while typing. We also wish the number keys stood out more — on the original Pre these were bright orange, but they are now a light grey and don't jump out at you like they should.

The weakest aspect of the Palm Pre Plus is its build quality. Though we are fans of the shape, size and looks of this smartphone, when placed next to an iPhone, or a HTC Desire its plastic design pales in comparison. The Pre Plus' slider wiggles uncomfortably when opened or closed, the plastic flap covering the USB port is flimsy and cheap looking, and the power button, silent slider and volume keys on our review unit all jiggled slightly when touched (not pressed). Palm has a history of producing well-built Treo devices, right up until the Treo Pro, so the flimsy build quality of the Pre is disappointing.

The compact footprint of the Palm Pre Plus makes it easy to pocket, but the trade-off is a small screen. The 3.1in display is clear and vibrant, but lags well behind the competition — it can't produce the same crisp text as the iPhone 4's IPS screen, and its colours aren't as bright or vivid as the HTC Desire's AMOLED screen, or the Samsung Galaxy S' Super AMOLED display. The smaller display also dampens the mobile Web experience, even if webOS generally handles most other tasks well despite the limited screen real estate.

Touch sensitivity is adequate, though taps towards the edges of the display often had to be repeated. A great feature is what Palm calls the "gesture area" — the touchscreen of the Palm Pre Plus extends to the black plastic below the display allowing you to swipe in different directions to perform common tasks. For example, you swipe from right to left to go back, and swipe up to bring up open applications, or access the quick launcher (a shortcut bar) when you're in an app. The design of the Pre Plus makes it comfortable to use the gesture area; in our opinion it's much more effective than tapping back on the top left corner of the screen or pressing the home button, as you would on an iPhone. 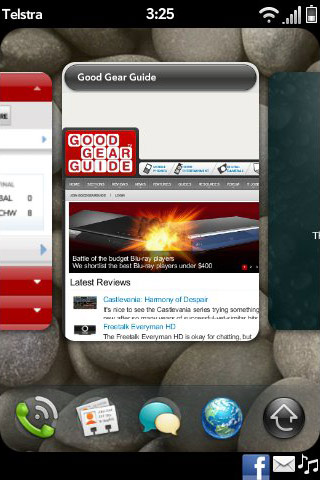 The Palm Pre Plus' webOS operating system is great at multitasking.

The most intelligent feature of webOS is its "cards" — essentially a way of swiping through multiple open applications. We think the Palm Pre Plus handles multitasking better than any smartphone on the market — including the iPhone and Android platforms. Every application you open on the Palm Pre Plus (whether it is your messages, e-mail, Facebook or a Web browser) forms a card. Swipe up on the gesture area to view open cards, then swipe left or right to scroll through the open cards. When you want to close an application, simply swipe it up off the screen. This reduces the amount of effort it takes to switch from one task to another, and the Palm Pre Plus handles the system with ease — we were able to run more than 10 applications at once without any significant slowdown or lag. The Pre Plus overall isn't as snappy as the iPhone or the latest Android phones, and it does take longer to open applications, but considering its internals, the multitasking abilities are simply superb.

The Palm Pre Plus deals with notifications in a manner that’s much more effective than the iPhone and just as good as Android phones. Any new notifications appear at the bottom of the screen, complete with a visually enticing icon; for example the Facebook logo for Facebook updates, and the e-mail icon for e-mails. The bottom of the screen can get quite full if you have multiple notifications, but you can easily swipe left to remove them, and, as is the case for most of webOS, they look great. 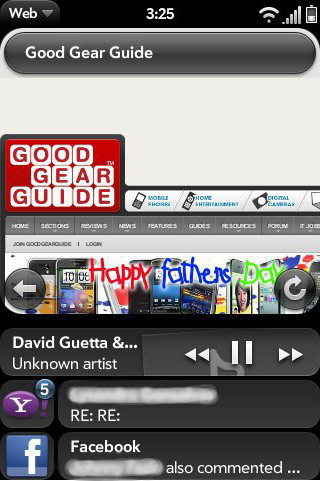 webOS' notification system is shown above. You can easily swipe to the left to remove the notifications.

Pre Plus: The Web and other features

The Palm Pre Plus handles Web browsing much the same way it deals with multitasking — excellently. The small screen does hamper the experience, but excellent touch sensitivity (including slick scrolling), relatively fast page loads and full multitouch make it one of the better phones for browsing. Safari is still the clear leader in this space, although Android has come a long way. However, webOS is particularly excellent at handling tabs; these are launched as separate cards and can be closed and switched just as you would any application. On a downside, text isn't crisp enough to read unless it's zoomed in to a reasonable level; then again, perhaps we've been spoiled by the iPhone 4's "retina display."

The Palm Pre Plus also offers an application store, the Palm App Catalog. It offers a limited selection of apps compared to the iPhone and Android platforms, but most of the must-have third-party applications are available. Other features include a 3-megapixel camera with LED flash, built-in GPS, Wi-Fi, Bluetooth, 16GB of internal memory and a standard 3.5mm headphone jack. Like the iPhone, the Palm Pre Plus lacks expandable memory.

Like with most smartphone platforms, not everything is perfect. For example, webOS' "synergy" feature, which groups contacts from multiple sources. It does this effortlessly and automatically merges contacts better than most other platforms, but once you've added all of your accounts you are left with no control of what contacts get entered in your address book. It automatically adds all of your Facebook, Gmail and IM contacts, quickly cluttering your phonebook if you have a large number of Facebook friends.

Other issues include the inability to customise notification tones, poor text correction software compared to competitors, a basic e-mail app that offers limited functionality (no threaded messages, and no way to manage or delete multiple messages), the limit of four icons in the quick launcher and sluggish performance (particularly when launching apps) compared to recent smartphones. The Pre Plus's battery life is also disappointing — with regular use, it often failed to last a full day.