The Origin EON15 doesn't come cheap, with a bare-bones configuration costing $2200. Nonetheless, if price is no obstacle, it represents an enticing proposition for gamers on the go.

The Origin EON15 is a high-end, 15.6in notebook aimed squarely at the hardcore gaming fraternity. It can be viewed as a portable sibling to the Origin EON18, with many of the same configuration options.

Equipped with the latest in cutting-edge notebook technology, including an Intel Core i7-820QM CPU and 8GB of DDR3 SDRAM, the Origin EON15 will comfortably run any program you care to throw at it. In addition to gaming, it will also prove suitable for demanding digital design work and HD video editing. On the downside, it costs more than the GDP of most developing countries (we exaggerate for effect) — but we suppose that's to be expected.

Origin may not be a household name just yet, but PC enthusiasts are certainly aware of its pedigree. The company is essentially a splinter group of ex-Alienware executives who left after the 2006 Dell buyout. In the words of Origin CEO and a co-founder Kevin Wasielewski; “Origin is the return of the real gaming PC — customisable, best performing, hand painted and hand built.” 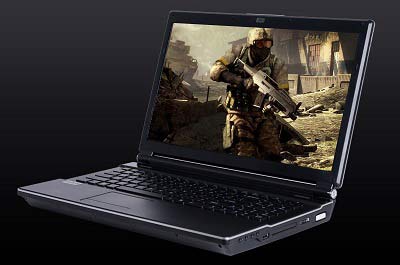 This dedication to the gaming community is obvious from a glance at the EON15’s components. The version we tested came with an Intel Core i7-820QM processor that runs at 1.73GHz (Turbo Boost can take it up to 3.06GHz). The i7-820QM's four cores use Hyper-Threading technology, so what you end up with is a CPU that processes up to eight threads simultaneously. The CPU is accompanied by 8GB of DDR3 SDRAM, a 500GB (7200rpm) hard drive and a 1GB ATI 5870M graphics card. (A GeForce GTX 285M alternative is also available for NVIDIA fans.) These would be pretty impressive specifications for a desktop PC, let alone a 15in notebook. The EON15 comes with Windows 7 Home Premium (64 Bit edition), which means it can utilise all 8GB of RAM.

Like the rest of Origin’s computing range, the EON15 is fully customisable, right down to the colour of its lid. This gives gamers freedom when it comes to building their ideal notebook. However, as rightwing conservatives are keen to remind us, freedom ain’t free — pricing starts at a rather steep $2299, with the version we tested boasting a price tag of $3999. If you require additional components and accessories, you can expect the price to climb even higher. (There's also a 3D-ready version, which you probably have to mortgage your house to buy). But then, this is the price you pay for uncompromised mobile gaming. 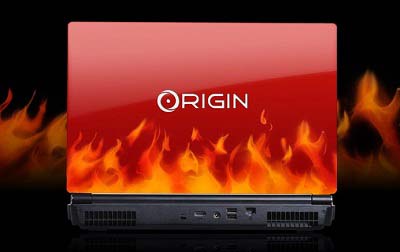 Custom paintjobs will set you back a minimum US$279.

One of the biggest selling points of the Origin brand is its customised paint jobs courtesy of Killer Paint — a collective of airbrush artists best known for their work in the auto industry. We were therefore understandably perplexed by our notebook’s plain black finish. It’s not even a glossy black finish.

As it turns out, we got the ‘blank canvas’ version of the notebook — there’s a range of suitably loud and funkadelic lid designs to choose from on Origin's Web site, although these naturally go for a higher premium.

Despite coming in a huge, safari-esque crate that could comfortably house a gorilla, the EON15 notebook is conspicuously light on extras. The package only contains the notebook, the PSU and a dinky felt coverlet. Any additional accessories, such as a mouse or external speakers, are going to cost you extra. This might seem a bit stingy for a $3999 notebook, but what you're really paying for is performance. (Still, would it have killed them to throw in a mouse mat or something? Tch.)

On the plus side, the Origin EON15 is an exceptionally well crafted notebook. We were particularly impressed by its LCD screen. The 15.6in display — which boasts a native resolution of 1920x1080 — had excellent viewing angles with minimal reflectivity. Images appeared sharp and colourful throughout testing, from gaming to photo viewing. Despite the screen’s high-gloss finish, we experienced few glare issues when using the notebook outdoors. This is something that many gaming notebooks suffer from, such as the Toshiba Qosmio F60 (PQF65A-00Y002) and ASUS G60J. This is a serious consideration for competitive gamers, where every inch of visibility counts. 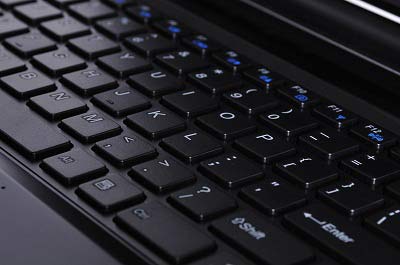 As you'd expect, the Origin EON15's keyboard has been tailor made for gaming. It sports large keys that are responsive to the touch. The addition of a full numeric keypad will be especially prized for gamers. On the downside, the keys are not backlit, which can make midnight gaming sessions a tad irksome. Meanwhile, the inbuilt stereo speakers provide a fair amount of punch — which is just as well, as this notebook can get quite noisy when under load.

Measuring 42x374x263mm and weighing around 4kg, the Origin EON15 isn't the smallest 15in notebook on the block. That said, it remains compact enough to lug around town should the mood strike you. (This isn't something that can be said about all gaming notebooks.)

The Origin EON15 comes with all the connectivity you’d expect from a high performance notebook. Four USB 2.0 ports, HDMI, DVI, eSATA, microphone and headphone jacks, 10/100 Ethernet and an ExpressCard 54 slot are all present. You also get a 7-in-1 media card reader, a dual-layer DVD writer, Bluetooth and 802.11a/b/g/n dual-band Wi-Fi, along with a 2-megapixel webcam. In fact, the only thing missing from our system was a Blu-ray optical drive (although this is an optional extra). 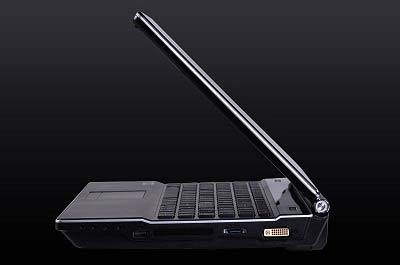 The Origin EON15 certainly didn't disappoint in our benchmark tests. It returned a score of 13,428 in 3DMark 06, which is a very respectable result. In the same test, the ASUS Lamborghini VX5 notebook (RRP: $3499) received just 6535. In our Call of Juarez DirectX 10 demo, the Origin EON15 returned an average frame rate of 124.8 frames per second (fps). Again, this is a rock-solid result for a gaming laptop — most games are perfectly playable at 30fps or above.

In Blender 3D, which can use all eight of the CPU's virtual cores, the Origin EON15 finished our rendering task in 38sec. This decisively trumps the ASUS Lamborghini VX5, which took 1min 14sec to complete the same test.

All in all, the Origin EON15 is a sturdy gaming laptop that excels in every area that matters. While perhaps overpriced, it offers an uncompromised gaming performance that blasts most other 15in notebooks out of the water. It also has an indelible 'cool factor' that most gaming laptops lack.