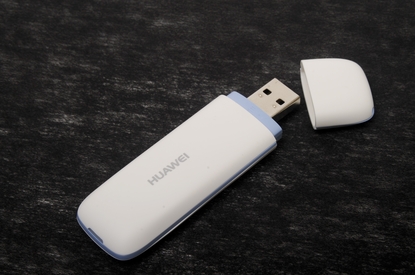 The Optus E153 USB mobile broadband modem is simple and hassle-free to set up, but isn't capable of very fast downloads.

Optus' latest USB mobile broadband modem, the E153, offers plug-and-play support for both Windows and Mac computers and has a microSD card slot, but it only supports download speeds of up to 3.2 megabits per second (Mbps).

Read our guide to the best prepaid mobile broadband modems.

The Optus E153 USB mobile broadband modem is about as exciting as most other USB modems. It's lightweight and finished in reasonably attractive white plastic. It has a slide off rear that reveals its microSD and SIM card slots. The microSD card slot allows it to double as a portable flash drive.

The Optus E153 USB modem is relatively slim, but it still prevented access to the second USB port on our 13in MacBook Pro. On larger notebooks this shouldn't be a problem though, and it is more of a fault on Apple's part. The Optus E153 USB modem doesn't have a rotating USB connector to reduce the risk of bumping it when connected to your notebook, and also lacks the external antenna port often seen on Telstra mobile broadband modems.

The software required to use the Optus mobile broadband service is stored on the modem itself and is compatible with both Windows and Mac OS X computers. The software is easy to install and allows you to quickly access your prepaid account details and see sent and received data.

The Optus E153 USB modem has a theoretical maximum download speed of 3.6Mbps and a maximum upload speed of 1.3Mbps, which is slower than most new devices. Optus claims the E153 will provide typical real-world speeds of between 550 kilobits per second (Kbps) and 2Mbps, but as with all mobile broadband devices the actual speed achieved will depend on a number of factors such as your location and equipment, network usage and coverage, and network congestion at the time.

Using our Broadband Speed Test, the Optus E153 USB mobile broadband modem managed to achieve download speeds of around 2Mbps, but regularly downloaded at around 1.4Mbps. Upload speeds were stable at around 700Kbps, but did hit 1Mbps on occasions.

Optus sells the E153 USB modem for $49 and includes 1GB of data in the starter pack that is valid for 30 days.