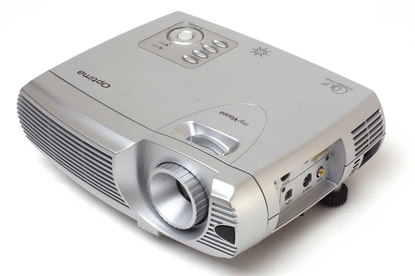 Optima's portable SVGA projector, the MyVision DDPD16SV00, is a business or home solution suitable for users looking for a bright and large image, without the price. Being one of the cheapest available projectors, the features of this projector are quite limited, although users who aren't too put off with the few image quality issues we discovered, will find the DDPD16SV00 a bargain.

The projector comes in metallic silver finish, with exhaust grills located on the front and side. This is an important design feature, as it allows the projector to be placed on a bookshelf, or next to the back wall of a room. The unit weighs just 2.14kg and when used with the included carrying case, could easily be used as a portable projector. Video input ports are located on the right hand side of the device, and provide a DVI, S-Video, composite, USB and sound-in port. This is quite a limited selection, but would suffice for computer use, and basic video usage. For testing quality, we used the DVI port with a DVD player and computer source, which provided the highest quality throughput.

The first thing we noticed when turning the device on is the annoyingly loud fan noise. The projector lamp is rated at a very intense brightness of 1800 ANSI lumens, and due to this, the projector does run hot. To cool the device, users might notice that the fans run constantly, at a noise level of 34 decibels, which is comparable to the hum of a pretty loud PC. The fan noise is easily drowned out by a movie soundtrack, but can be distracting in quiet scenes. Optima have built in a speaker into the projector, which is adequate for low volume sound support, but might only be considered suitable for small presentations or non-intensive sound applications.

When setting up the projector, we found many useful features in the menu system which can be accessed through the joystick enabled remote control, or through the onboard controls located on top of the projector. Image quality controls include brightness, contrast and colour temperature and there is also picture setup controls. These controls were very helpful and allow the projected image to be projected in front-forward, front-reversed, rear-forward and rear-reversed. The different modes of operation mean the projector can be placed in a rear projection setup, as well as ceiling mounted. The included remote control also can behave as a mouse control and laser pointer.

In operation, we found the picture quality to suffer from some visual aberrations which are known to be present in cheaper DLP systems. These included both the fly-screen effect, and a detectable amount of the rainbow effect. The fly-screen effect was incredibly noticeable, even at viewing distances greater than 2.5 metres. The visible effect of this was a thin dark grating covering the entire screen, the cause of this being the large dot pitch of the individual mirror elements on the DLP chip. The native resolution of this projector is 800 x 600, and users should note that even though higher resolutions can be run in compressed modes, this will only introduce more visual inaccuracies and also amplify the aberrations such as the fly-screen effect. Another significant distraction present in the image was from the rainbow effect. The rainbow effect, a common effect defect of DLP projectors, is caused by rotating colour wheel in DLP projectors. Some users might not notice this at all, but for users with sensitive eyes, the DLP effect appears as flashes of colours, most noticeable in fast action or bright scenes.

In terms of image quality, DLP systems usually provide for very high contrast, colour and clarity. In the case Optima's DDPD16SV00, the contrast ratio was totally acceptable, with the darkest scenes being rendered and easily resolved through the many shades of black. Colour levels were impressive, with colour reproduction being very accurate across the spectrum. The bright 1800 ANSI lumen lamp ensured that the colour levels remained clear in a range of ambient lit conditions. Generally, any lamp above 1500 lumens can be used satisfactorily with room lighting on, but of course, users should not try and compete with direct sunlight.

We found the Optima DDPD16SV00 quite satisfactory for general projection, especially when keeping the price in mind, and for users on a budget looking for a bright and capable projector, this might do. If you are picky about image quality, and are willing to spend a little more, you might want to consider Viewsonic's PJ402D or Benq's portable PB6110.