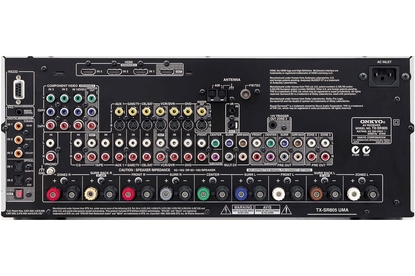 The TX-SR805 can provide some of the best audio you're likely to hear outside a theatre — once you've managed to set it up.

When Onkyo introduced its TX-SR805 home-theater receiver last spring, it was the only receiver capable of decoding high-definition audio formats — Dolby TrueHD and DTS Master Audio — which are part of the Blu-ray and HD DVD specifications. These formats are to audio as high definition is to video, allowing discs to deliver extremely high-quality soundtracks.

Unfortunately, no Blu-ray or HD DVD player could output audio in Bitstream format, so the player — not the receiver — had to decode the Dolby TrueHD or DTS Master Audio audio, And that situation made the TX-SR805's unique capability worthless (temporarily, anyway). Since then, however, a few players capable of outputting Bitstream have reached store shelves.

I tried out the Onkyo TX-SR805 with a $480 Panasonic DMP-BD30 Blu-ray Disc player, which can output Bitstream through either its HDMI port or its digital audio ports, thus enabling the receiver to decode high-definition audio. The combination results in phenomenal audio — possibly the best you can get in your living room today. The Onkyo's price seems very reasonable given its capabilities.

Audiophiles want their best piece of gear to handle decoding so they can enjoy optimum audio quality from their system. Presented with a high-end DVD player and an inexpensive receiver, an audiophile would set up the system so that the DVD player, rather than the receiver, performed the video upscaling. Many Blu-ray and HD DVD players pale in comparison to high-end home-theatre equipment; if you're using one of these players with a surround-sound setup, it makes sense to have your receiver do the audio-decoding work.

Using the powerful, well-decked-out TX-SR805 for decoding makes sense. It outputs 130 Watts per channel, can drive up to 7.1 channels and has three 1080p-compatible HDMI 1.3 inputs (plus one HDMI 1.3 output for connecting a TV). The unit's massive transformer and heat sink contribute to its anvil-like weight of 51 pounds (the Blu-ray player I used with it weighs only 7.3 pounds).

The receiver works with Sirius and XM satellite radio, and can power stereo speakers in a second room (to handle that, however, you'd have to string speaker cables, probably through walls). The TX-SR805 lacks an HD Radio tuner and can't pull in digital audio over a network (Onkyo's $2000 TX-NR905 adds network features to the mix).

The receiver comes with an adequate plastic remote that has backlit buttons. I occasionally had trouble using the centre thumbwheel to navigate menus. And just before I returned the receiver to Onkyo, the spring-loaded catch for the panel that conceals lesser-used controls broke; the plastic retainer should be sturdier than it is.

I connected my Blu-ray player to the TX-SR805, and used a Pioneer PDP-5080HD HDTV and NHT Classic Three 5.1-channel speakers as outputs. The receiver comes bundled with a speaker-calibration utility and a microphone. To calibrate, you plug the mic into a port on the front of the receiver and start the utility (which you can view on the TV screen). The receiver produces "blat-blat-blat" test noises through each channel, measures audio level through the mic, and sets appropriate speaker output levels automatically. The calibration, which took about 10mins to complete, worked very well: Output seemed perfectly set, even from the surround channels. You also have the option of adjusting the output manually via the receiver's on-screen controls. The controls aren't pretty — they look like a DOS screen — and they have almost no explanatory text.

The TX-SR805's biggest problem is that it's such a complicated product. For example, when I tried to play DTS Master Audio tracks from a Blu-ray disc, I could get the receiver to output simulated surround-sound formats — but not the DTS Master Audio — until I turned off the HDMI monitor (video output) feature. But that meant I had to choose between watching a movie and listening to its high-definition audio; I couldn't do both at the same time. After scouring the 120-page manual and fiddling with every setting I could find, I gave up and contacted Onkyo. A rep instructed me to turn off a setting that directs audio to be sent through the HDMI output connected to the TV; this setting was buried in one of the on-screen menus.

After I set everything correctly, the receiver showed a "DTS-HD MSTR" message in LED text, confirming that it was driving five channels, plus the subwoofer. I couldn't find any Dolby TrueHD content in our library of Blu-ray discs, but I found several movies with DTS-ES and DTS Master Audio tracks.

I am at a loss to describe how amazing the sound from my setup was. The bass from an action movie's explosions and music sounded thunderous — but very tight, not muddy — and I could hear a wide range of sound at high volume without feeling that I was punishing my ears. And even as all of this loud stuff was coming through, I could hear distinctly different sounds coming from different speakers. Even whispers emerging from the NHT centre-channel speaker sounded incredibly clear. The "'ppphht" emitted by a streaking rocket moving from the right side of the room to the left side was even more thrilling than the subsequent explosion.

On the other hand, when I fast-forwarded through Blu-ray movie scenes with DTS Master Audio enabled, I could often hear static and what sounded like feedback, loud enough to be unpleasant. The manual says that these effects are not a malfunction, but a result of technology used inside the receiver. If I were Onkyo, I'd try to fix the feedback issue.

I also listened to Blue Man Group's The Complex DVD Audio disc on the Panasonic player (music-only Blu-ray discs don't exist yet). Like most Blu-ray players, mine didn't recognise DVD Audio discs; the disc I tried had DTS 96/24 (5.1-channel, 96KHz/24-bit) audio tracks, and features lots of funky sounds emerging from different channels — sometimes at once, and sometimes overlapping. Because the audio had been encoded for discrete channels, I could easily tell where individual sounds were coming from, and this gave the music a thoroughly enjoyable, surreal quality.

Altogether, the audio was the best I've heard outside a theatre.

The TX-SR805 is an impressive product. Compared with other receivers in or out of its price range, it's a steal. Some audiophiles may sneer at the TX-SR805, because Onkyo is a mid-tier brand. It's certainly no NAD or Mcintosh, for example. But the TX-SR805 costs a fraction of what a receiver from one of those companies costs — and neither of them makes receivers capable of decoding high-definition audio.