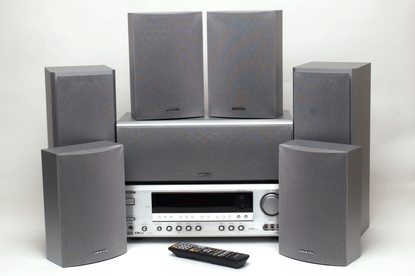 The HT-S780 is all about big: big sound, big size and big features

With games consoles, DVD players and AV receivers all vying for a place under the TV, it can be a hassle setting up a home theatre system. Knowing which units go with what and trying to assemble all the components can be a trying experience for the amateur user. This is where 'Home Theatre In A Box' systems come in to play by providing all the components in one easy to use package. Most systems combine the AV receiver and DVD player into one but Onkyo has bucked this trend by providing separate units: the DV-SP303 and the HT-R530 AV receiver. Both are of good quality and offer above average performance for a system in this price range.

Setup
The HT-S780 is a 7.1 system meaning that you get seven surround speakers plus a subwoofer in the package. Eight speakers plus the two AV units could mean a lot of extra hassle during setup but thankfully Onkyo has opted for the industry standard system of colour coded wires. One slight problem could be the length of the speaker wires. Though at nine metres long they may appear to be lengthy, for a 7.1 system we would have expected a few more metres of cable. This can easily be rectified with the purchase of additional wires, but it would have been nice to see them come as standard. The AV receiver handily has a pass-through power socket so the DVD player can be plugged directly into the back. The one aspect of setup that left us disappointed was adjusting the speakers. Unlike many similar products, there is no on-screen menu to be displayed on the television: entering fiddly parameters must be done through a slightly clunky interface on the unit's LCD screen.

Design
The AV receiver's interface isn't the only clunky aspect of the system. With the HT-S780 Onkyo has opted for function over form. There are no shiny buttons, glowing dials or stylish curves to be seen. Though the receiver's finish isn't unattractive, it is big, heavy and boxy. Even the remote control is bland. Fortunately, it is otherwise well designed. Choosing basic styling has left Onkyo to concentrate purely on making the relative components as feature-packed as possible. For a mid-range system we were impressed with the number of inputs Onkyo has crammed in. Though lacking digital high definition connections such as HDMI or DVI, everything else was covered with multiple component connections and digital audio ports. After connecting the accompanying DVD player there are still two component inputs and two digital optical inputs left to play with.

Audio Performance
The HT-R530 is an impressive receiver. With up to 110W of power per channel this is a hefty amplifier designed to get the most out of its equally hefty speakers. The three front speakers contain dual 12cm woofers with a separate tweeter. These three speakers alone offer an impressive sound but backed up with the 10-inch subwoofer and four surround speakers, the sound is particularly engaging. Our one complaint is that perhaps Onkyo has concentrated too much on power. At lower volumes the sound feels a little disjointed as the subwoofer output does not match the other speakers. It all feels a little forceful, lacking the subtleties of other systems. We found this to be most noticeable when listening to music, though it was occasionally apparent when watching films. However, if high-powered robust acoustics are what you are after, the HT-S780 is definitely a great choice.

Audio Options
Like most manufacturers, Onkyo has included all kinds of surround options with support for Dolby Digital, Digital EX, DTS, Pro Logic II and Neo:6. These are backed up with equalisation options for orchestral music, rock, pop and other styles. Onkyo also include two other useful additions: direct mode, which eliminates extra processing to provide a purer sound, and OptiResponse, which adds further power to the sound. We found turning on OptiResponse to have the best effect of any of the equalisation options. In addition to these presets, the bass and treble levels can also be manually adjusted on the receiver, and the subwoofer has its own volume control.

Overall one thing stands out about the HT-S780: its power. This is the ultimate macho home entertainment system with big speakers, a big subwoofer, big AV receiver and big amplification. If you want a small, sleek, stylish machine this is definitely not the system for you. If, however, you want to blow the walls down, then you've just found the perfect match.