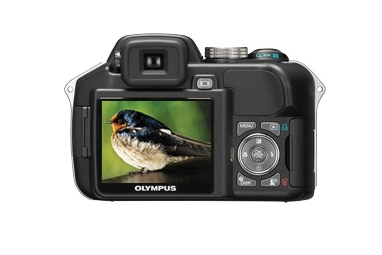 While not a perfect camera, Olympus' SP-560UZ is an excellent choice for users after an ultra-zoom. It combines good pictures with a robust feature set and a fantastic design.

We can here what you're thinking about this review already. "But GoodGearGuide, you've already written up this model, haven't you?" But fear not loyal readers, no mistake has been made. While Olympus' SP-560UZ does bear a striking resemblance to its little sister the SP-550UZ, there are a few minor improvements, including a small megapixel increase and the addition of face detect and shadow adjustment. Aside from these refinements this camera is largely unchanged and as such still provides a great option for users looking to delve into the ultra-zoom category.

Packing in a massive 18x optical zoom this offers what is currently the largest zoom lens in a non-SLR camera. Backed up by two layers of image stabilisation (sensor shift and a digital ISO adjustment option), you can take some pretty impressive hand-held shots with minimal blurring.

Image quality on the whole was impressive. Our shots came out detailed and crisp. They were perhaps a tiny bit towards the soft side, but not in a negative way and this can easily be tweaked in post-processing. There was no corner softening to speak of although purple fringing and haloing did rear their heads in some of our outdoor shots.

Noise performance was quite good, with most sensitivities up to ISO 800 usable for small prints. ISO 100 and 200 did produce more noise than anticipated, but it was fine and white and barely noticeable. ISO 400 produced some slightly colourful noise, but again it won't show up unless you make sizeable enlargements.

Colours were rendered very strongly, with a vibrant and slightly oversaturated look mostly evident in primary colours. Some users may wish to tone them down a little but many appreciate the rich, colourful look. That said, we experienced some exposure problems, particularly when shooting outdoors. Everything was a stop or two overexposed so we'd definitely recommend tweaking the exposure before shooting.

One thing we were very interested to test was the shadow adjustment mode and thankfully it didn't let us down. Shots taken while it was activated exhibited noticeably more detail in dark areas. Many models struggle to achieve clarity in high contrast scenarios so this will be a big boon for some users.

The rest of the features are fairly standard for an Olympus advanced camera, although the inclusion of face detect is a nice touch. Unfortunately, the burst mode hasn't been improved and as such it only operates at 1.8 frames per second at full resolution (although much faster if you're happy to take a quality hit). All the usual manual modes are available along with ISO sensitivities up to a massive ISO 6400, and a custom white balance setting is also included.

In our speed tests, the SP-560UZ was a little disappointing but this wasn't surprising. The three second startup time can be attributed to waiting for the massive lens to extend but it still may prove troublesome. On the other hand the shutter lag was a very low 0.05 seconds and shot-to-shot time came in at 2.1 seconds.

Aesthetically, the SP-560UZ resembles the SP-550UZ almost exactly, and that is a great thing. It is solidly constructed, sits perfectly in the hand and looks fantastic. Typically ultra-zooms are not known for their style and good looks but this model certainly bucks the trend.