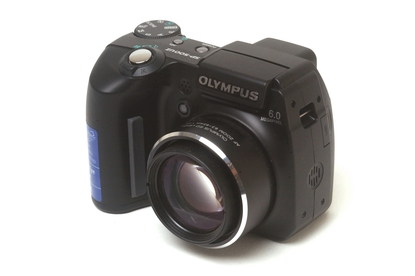 A very respectable advanced camera model that is only really let down by noisy pictures.

With speedy operation, a big zoom and a respectable set of features, the Olympus SP-500 does a good job of making it in the 'prosumer' category of cameras. It isn't going to blow your socks off by any means, but the performance is solid and the average (rather than stunning) image quality is really the only factor holding it back.

The key selling point is the robust manual functions. Olympus has included a nice bundle here, including manual white balance, noise reduction and even a bulb shooting mode. We would have liked to see a stronger continuous shooting mode (it only operates for three shots or five in the slower mode) and we did feel the absence of any image stabilisation, but overall the package was more than satisfying for a camera in this price point.

All of this is complemented by a big 10X zoom, which is the other prominent feature of this model. It does protrude quite a fair way (compared to a model like the Kodak Z650) but that's to be expected for such a big lens. It won't make a difference to most happy snappers, but when taking shots at big events or in specific outdoors situations it really comes into its own.

Whilst we can understand why the lens needs to be so big, we really felt the design as a whole was a little on the large side. The grip is particularly chunky, although it does slot into your hand quite easily. There is a lot of empty space across the body that doesn't seem to serve much of a purpose, so we feel that it could have been much more compact in terms of size.

This only really has an impact if you're concerned about form factor. The SP-500 won't be fitting into your pocket any time soon, but then again, trying to walk down the street with an advanced, 10X zoom model in your pocket is just asking for trouble (and ridicule!). What the extra space has allowed Olympus to do is lay the controls out very thoughtfully. It is rare for a button configuration to be anything other than average, but on this model we felt it deserved some sort of credit. All the controls are perfectly placed to give you maximum access and there aren't any hidden buttons in out of the way locations. Big thumbs up.

Our thumbs however drop down to the halfway mark when it comes to image quality. Most of our tests came back with average scores although our shots were a little noiser than normal. Colour reproduction scored 6.72 which is a very reasonable score, and sharpness was similarly impressive at 1270. At that level, you'll be producing great prints in both smaller and larger sizes. Where the quality really fell down was in terms of noise. Our testing revealed various noise scores ranging from 1% through to 8%. 8% is ridiculously high and only occurred once, but the average score was still about 2.4% which is much higher than we'd like to see.

Our test shots highlight this. They were quite noisy across the board regardless of lighting conditions, with thick, tangible white fuzz that was really evident across a broad spectrum of colours (not just the greyscale areas). Noise aside, we thought the shots looked pretty reasonable. The camera responded well to a variety of situations and the end results were more than good enough to blow up to 5x7 or 6x8. However, perhaps you'd be better off finding a better sensor if you're looking for A4 or bigger prints.

If speed is your thing you'll be pleased, if not stunned, by the SP-500s performance. Shutter lag measured roughly 0.8 of a second, which is pretty good compared to your average prosumer model but startup was slightly inhibited by the extension of the massive lens. Shot to shot time could have been better taking roughly 2.25 seconds to write an image, but when switching to RAW format we were very impressed with the six second delay between snaps. You certainly won't be taking any sports series snaps in RAW format, but it compares very favourably with the competition (some models can take 10-20 seconds).

Sadly, Olympus appear to be ignoring GoodGearGuide's battle against AA batteries (unbelievable we know!) and the SP-500 epitomises this, requiring four of them. We can see why this is useful for an on-the-fly changeover when you run low on power, but having to buy a new packet of batteries every two or three weeks is going to double the cost of your camera in the long run. We managed a bit over 400 shots before our first set of batteries died, which is a pretty decent number, but you have to remember many other cameras only use two AA batteries, so the SP-500 is consuming double the power under the hood.