The Olympus PEN E-PL1 is a budget interchangeable lens camera, but the problem is that it's just not cheap enough. You don't get an EVF nor any physical exposure controls, and the body is just very plain overall. It doesn't have the appeal of the PEN E-P2. However, it can still be used to take clear and vibrant photos, and it also some fun art modes to play with.

It’s a Micro Four Thirds-based camera that costs $999 in a single lens kit with a 14-42mm lens (28-84mm is the 35mm equivalent). You can get up to four lenses for the E-PL1, and more if you use an adapter for Olympus E-System lenses. The other three Micro Four Third lenses are a 17mm f/2.8 prime lens, a 9-18mm wide angle zoom lens, and a 14-150mm tele zoom lens. The Olympus PEN E-PL1 has a 12.3-megapixel sensor, dimensions of 17.3x13mm and a crop factor of 2x compared to a regular 35mm camera; so to get the equivalent focal length of the lenses in the 35mm format, you need to double the numbers.

The PEN E-PL1 doesn’t feel as solid as the PEN E-P2 and it looks fairly plain. It lacks the dedicated dials and buttons that are available on the PEN EP-2 for controlling the exposure; you have to use the on-screen menu if you want to change the shutter, aperture and ISO values. This also means you have to learn the layout of the menu system and what all the buttons do. It’s a little perplexing at first, but you soon get the hang of it. The LCD screen is 2.7in, which is 0.3in smaller than the screen on the E-P2, but it has the same resolution. It’s not as bright as we remember the screen on the E-P2 being, and images can be hard to view in bright light.

Other differences between the PEN E-PL1 and the E-P2 are the location and design of the mode dial, the inclusion of a built-in flash and a slightly narrower and lighter body. It’s a comfortable and well-balanced camera to use and the only annoyances are the very stiff mode dial, the memory slot location in the battery compartment, and the lock that can be found on some of the zoom lenses. Before using the camera, you have to unlock and extend the lens. 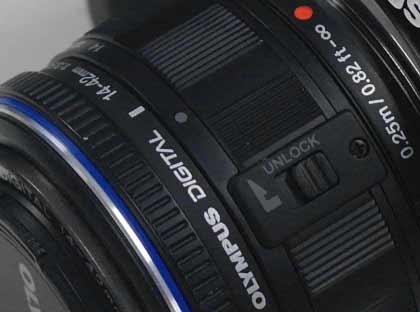 The lock helps to keep the lens as small as possible and to prevent it from extending when the camera is not in use.

There is a difference in the exposure settings you can employ as well. Whereas the Pen E-P2 allows you to use a shutter speed as fast as 1/4000sec and an ISO as high as 6400, the Pen E-PL1’s shutter only goes up to 1/2000sec and its ISO speed up to 3200. This won’t affect the way you use the camera too much.

You won’t want to venture too high in the ISO range anyway because anything above ISO 800 will give you some feathering and discolouration in dark areas. These blemishes aren’t too bad when viewing photos on a high-definition screen, but they are very noticeable when you look at the photos at their native size. 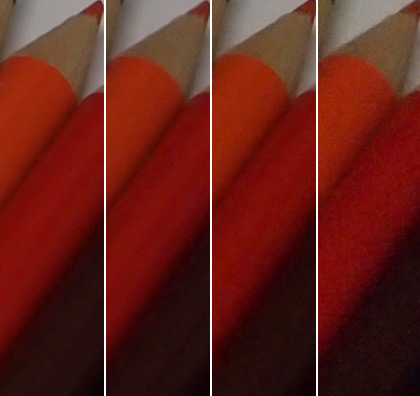 The high ISO works well with the grainy black and white filter, so you can take some arty shots in dark areas while pushing the ISO speed to 1600 or even 3200. During the day, the Pen E-PL1 will take well-coloured shots and they will look crisp. 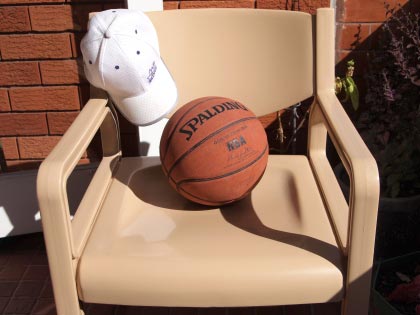 You can make use of the built-in art filters, which include Pop Art, Grainy film, Pin hole and Diorama among others. The Diorama and Pin hole filters are slow to use and framing your shots can be awkward due to this, but the Pop Art and Grainy film filters are easy to use. We especially love Pop Art as you can use it to bring out the colours of the sky at the end of the day, for example. 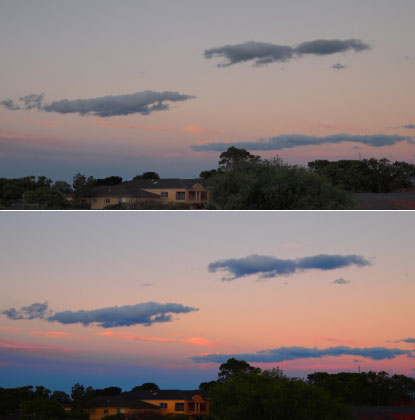 Oftentimes when you try to capture an amazing sky it turns out flat and lifeless, but the Pop Art mode can really makes some scenes look magical by really bringing out the blue and purple. Top: without Pop Art; bottom: with Pop Art. 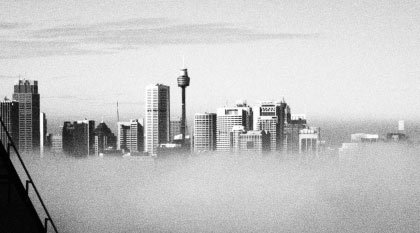 The Grainy Film filter in action.

The focusing performance of the PEN E-PL1 is accurate and you can select from up to eleven single focus points. You also get focus tracking, which can lock on to your subject and track it effortlessly across your screen. It can be good for taking photos of pets and kids and it can even focus on an inanimate object. We were able to track objects quickly across the screen and even when the object went out of focus, the camera was able to refocus quickly. It could come in handy if you’re a plane spotter taking shots of aircraft as they come in for landing.

The Olympus PEN E-PL1 is a decent interchangeable lens camera that’s capable of taking clear and vibrant pictures; its art modes are also a lot of fun. However, it really does need a built-in electronic viewfinder (EVF), or at least a bundle that includes one at the same $999 price. When you compare it to cameras such as Samsung’s NX10, which has a built-in EVF, it just doesn’t seem worth it. If it was a couple of hundred dollars cheaper, then we’d be glad to recommend it.