A rugged Olympus digital camera for the outdoor adventurer. 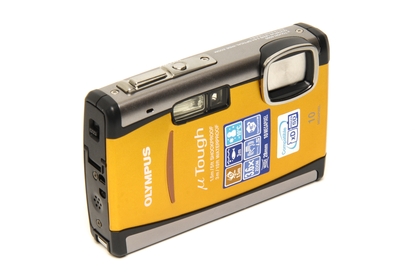 There’s not much that we don’t like about the Olympus Mju Tough 6000. In fact, we think it’s a lovely ruggedised camera that anyone with an adventurous bone in their body should put on their shopping list.

The Olympus Mju Tough 6000 digital camera is the little brother to the Olympus Mju Tough 8000, but it doesn't take a step back in the photographic stakes. It’s a compact, ruggedised and automatic camera that’s useful for snorkelling, bushwalking, skiing and countless other outdoor activities. It won’t break if you drop it; it won’t get ruined if you bury it in the sand at the beach; major contact with liquids won’t render it useless. So as well as being perfect for the outdoor adventurer, it’s also the best camera on the market for the serial klutz.

With a 10-megapixel sensor, the Olympus Mju Tough 6000 has more than enough resolution to capture large, printable photos, and its lens is good enough to produce clear and vibrant images. It doesn’t have a large zoom, but considering the small, non-protruding lens that’s enclosed in the camera’s body, this is not surprising. It has a range from 28mm to 100mm, which makes it useful for close-ups, portraits and landscapes.

Our photos came out vibrant and clear, and, apart from some blown highlights, they were sufficiently exposed. It handled dynamic ranges well enough, but it was a poor performer in low light. This is important to note if you’ll be taking photos underwater, where you’ll want to shoot with as much light as possible to avoid blurriness due to camera movement, and graininess due to high ISO speeds.

The Olympus Mju Tough 6000 is rated for a depth of 3m, so it’s better suited to snorkelling than diving adventures, and it will take clear shots underwater when there is enough light. Shots taken in the shallows of an indoor pool without a flash were clear, despite a relatively slow shutter speed of 1/30th of a second. Details of underwater objects were well defined in our photos and colours were accurately represented.

But it’s not necessary to fiddle with the Olympus Mju Tough 6000 too much, as its built-in scene modes (all 20 of them) do a good job of adjusting the camera to your environment (from underwater scenes to night-time shots). There are auto and intelligent auto modes, video mode and beauty mode. Beauty mode can be used when taking portraits, as it air-brushes images in the camera (no PC needed) to smooth out skin tones and remove wrinkles. It actually does a decent job.

The one issue with the Olympus Mju Tough 6000’s image quality that was noticeable in many of our underwater test shots was chromatic aberration. It was particularly evident when looking up through the water, where light colours met dark colours and produced a thick blue line that could be seen even when we weren’t zoomed in to the photo all the way. The light is dispersed differently when the lens isn’t in water, and the same type of chromatic aberration wasn’t noticeable in our portrait, macro and landscape shots.

The Olympus Mju Tough 6000 has a very bright and clear 2.7in LCD display, which makes it easy to frame and focus shots even on the brightest of days, and it also features tap control. Tap control is handy if you are wearing gloves and want to change flash or macro setting. The camera's buttons and mode dial feel solid, and the shutter button has two distinct levels when pressed, which again is useful if taking photos while wearing gloves.

Be sure to clean the lens when you bring the camera up from the water, as fogginess will be visible in your shots if you don’t. Also remember to dry the camera before attempting to remove its memory card. It accepts xD and miniSD cards, but the former should be used if you plan to use the in-camera panorama stitching, which is quite useful.