This tiny SLR is a solid performer 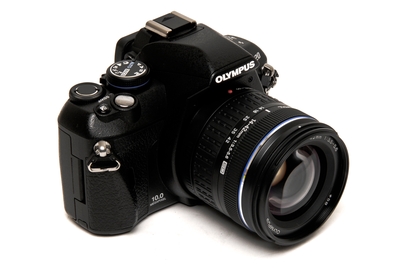 If you're after a petite SLR then the Olympus E-420 is a solid performer. It keeps pace with the competition in most areas, while maintaining dimensions that are significantly smaller.

The E-420 is a small camera at the bottom of Olympus' SLR line-up. Despite the camera's diminutive design, not much has been sacrificed in the way of features. We were disappointed by the lack of image stabilisation, but live view is present as is Olympus' dust reduction technology. The 10-megapixel (Mp) sensor captures some fairly good quality snaps, making this unit a competitive choice for those looking to take their first steps into SLR territory.

Measuring 129.5x91x53mm and weighing just 380g, the E-420 is definitely a petite SLR. While it is slightly outdone in the size department by its predecessor the E-410, it still provides the best current option for users looking for a somewhat pocketable SLR.

The 10Mp sensor doesn't quite match up to competing entry-level units when it comes to resolution. That said, it still performed well in our tests and will be fine for most enthusiastic amateurs.

Pictures were quite sharp on the default settings, with fairly good resolution and detail, although they did have a slightly soft tone. This was easily remedied by increasing the onboard sharpness, which resulted in a more pleasing balance. We used a 14-42mm Olympus lens and spotted some minor chromatic aberration during our testing — some slight haloing on high contrast edges in our indoor chart shots. Some minor purple fringing could be seen outdoors, but again it wasn't problematic.

Noise performance was quite impressive. ISO sensitivities only extend up to ISO 1600, but at all levels shots are usable for small and medium prints. It isn't until ISO 800 that noise really becomes visible at all; even at ISO 1600 it is well controlled and there is no noticeable detail loss.

Colour performance was equally solid. We tested mainly using the Vivid preset, which produced a fairly well-balanced look that tended towards being strongly saturated. Reds were particularly rich and vivid, but overall everything was extremely accurate. Imatest confirmed this, giving the E-420 an impressive score in its colour checker test.

In terms of speed, this model did quite well. Its burst mode operated at a magnificent five frames per second — extremely speedy. Shutter lag was basically non-existent, and time between shots was a relatively low 0.3sec. Start-up time was a little slower than some of the competition at 1.2sec, but this is thanks to the dust reduction system, which activates automatically at power up.

Aside from dust reduction (which operates very well), live view also makes a welcome return. It has received an upgrade and has contrast-based autofocus, which significantly improves focus speeds when viewing through the LCD. Previous generations required the mirror to actually flip up out of the way so the sensor could focus properly, which took several seconds. This method eliminates that problem. While it still takes a second or so, it is considerably quicker than some competing models. We were a little disappointed to find the sensor-based stabilisation on other Olympus units hadn't made its way to the E-420. That said, all the other features you'd expect are present, including face detect, shadow adjustment and full manual shooting modes. Wireless flashes are also supported and the setup process is quick and intuitive which will greatly appeal to portrait enthusiasts.

This time around Olympus has bulked up the design a little, giving this model a slightly chunkier hand grip (an area of complaint with the E-410). This makes it slightly easier to hold, although users with big hands will still struggle to get a proper grip. That said, the design is sturdy and solid and the controls are well laid out. We found the menu a little counter-intuitive at times (functions like the custom white balance can be fiddly to setup).