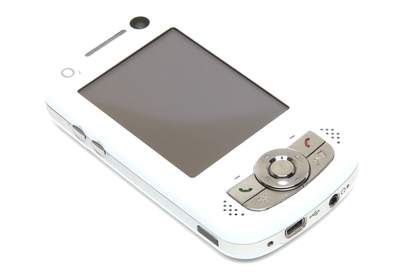 The Limited Edition Xda Atom Life adds the Windows Mobile 6 OS and a stylish white colour scheme, but nothing else has changed. Despite this, its still a very reasonable smart phone with a strong feature set.

O2 has decided to give the popular Xda Atom Life a facelift. Although improvements are minor, the Xda Atom Life Limited Edition unit runs the latest Windows Mobile 6 OS, and is finished in an attractive, all-white colour scheme, ensuring it will stand out from the crowd. Specifications and features remain the same with HSDPA, a 2 megapixel camera, SRS WOW HD surround sound and MP3 and FM radio functions standing out as the main attractions.

The Xda Atom Life Limited Edition is a tri-band GSM 900/1800/1900, UMTS 1900/2100, GPRS and 3.5G HSDPA phone. It performs quite well for voice calls, with reasonable in-call quality and good volume levels, but the quality of the hands-free speakerphone is poor. We also noted a slight echo at full volume, and conversations held in areas with background noise weren't always clear. The Atom Life includes a hands-free speakerphone, speed dialling, call history, and a 1000 entry phone book. Being a 3G handset, it is also capable of video calling thanks to a front mounted VGA camera.

The Atom Life Limited Edition supports a wide range of file formats, most playable through Windows Media player. These include MP3, WMA, WAV, AMR-NB and MIDI files. Users can also assign most files for use as ring tones. Unfortunately, the media support is let down by a 2.5mm headphone jack instead of the standard 3.5mm. This means users will need an adapter before they can use their own set of headphones with the Atom Life. The SRS WOW HD surround sound experience is average, though the speakers on the front of the unit didn't sound too bad for such a small device. Overall, however, we still think that the quality could be improved.

O2 has again included its own developed applications on the Xda Atom Life Limited Edition; O2 AutoConfig, O2 AutoInstall, O2 Connect, O2 MessagePlus, O2 MediaPlus, O2 Phone Plus, and O2 SMS Plus. The best of these is O2 MessagePlus, which allows users to conveniently check any incoming messages on one screen. This application will display any new SMS, MMS, email and RSS feeds, allowing you to reply, forward, delete and backup any messages from one location. We also found the O2 MediaPlus application very useful. This is a single interface where users can access all their multimedia files. The Atom Life also includes an FM radio with Radio Data System (RDS), but keep in mind that the included headphones act as the antenna, so you'll need them to use this feature.

The Atom Life's speed is above average for a smart phone, and is powered by an Intel XScale PXA 270 624MHz processor, 1GB of flash ROM, as well as 64MB of RAM. O2 claims the Xda Atom Life is the fastest PDA-phone available on the Windows Mobile platform at the time of its release, and we agree. The processor does an excellent job, as we experienced minimal slow-down on normally taxing functions such as running multiple applications. For extra storage, O2 has included a miniSD card slot on top of the unit.

Photos taken with the 2 megapixel camera are decent, but far from sharp or vibrant. There is a white LED strobe flash and a self-portrait mirror, but night time photography isn't the best. Being a 3G handset, the Atom Life also includes a front mounted VGA camera for video calling, and this can also be used for portrait photos. Photos can be taken at resolutions from 80x60 up to 1600x1200 and the camera has a range of options including night and sports scene modes, 2.5x digital zoom, a five or 10 second self-timer, four and nine picture burst modes and a range of effects. There is also a video camera, which captures clips at resolutions up to 176x144, but the quality is below average.

The Atom Life Limited Edition may retain the same design features as most smart phones without a keyboard, but we were impressed with its looks. The unit is finished in a gloss white plastic, with silver edging. The glossy white surface is excellent for hiding fingermarks; we couldn't say the same about the regular black version. The Life measures 106mm x 58mm x 18mm and weighs a very reasonable 145g.

The 2.7in LCD touch screen is fairly standard, with a 320x240 resolution and 65K colour. It isn't the brightest and clearest smart phone display we've reviewed, but it's more than adequate for the job. Unfortunately the screen is quite difficult to see in direct sunlight and has a poor viewing angle. Above the screen is a small grill which houses the in-call speaker, as well as status lights; green to signify a connection with a telephone operator, red to notify charging and blue to signify that Bluetooth is activated and switched on.

Controls are standard, with a five way navigational pad doubling as volume keys and previous/next track. There are also answer/end call keys, two selection buttons and dedicated keys for Start and the O2 MediaPlus application. There is also a dedicated camera button on the right hand side and volume controls on the left.

Battery life is a bit below average according to O2 figures of just four hours of talk time and 200 hours of standby time on a standard GSM network. Switching to a 3G network gives you just two hours of talk time, so users will most likely be forced to recharge the Life every day, especially when using multimedia features. The Atom Life Limited Edition is conveniently charged via either a standard mini-USB cable or the included AC adapter.