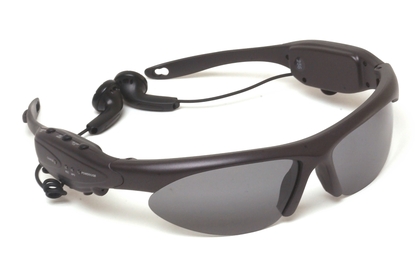 We can’t, in good conscience, recommend these glasses, if you really want an Mp3 player in your glasses, get yourself the Oakley Thump.

Lo and Behold there is something sinister lurking in your digital convergence store, a dark force hell bent on making their users look foolish, ridiculous and very un-cool. The Nu Dark Shadow MP3 sunglasses are a tragically inferior version of the Oakley Thump and since the Thump has issues to begin with, things don't bode well for Nu.

The most important thing in any pair of sunglasses is design. Wrap around sunglasses appeal to many people but even those brave wearers should steer clear of the Dark Shadows as they scream inferior quality. They aren't even comfortable, sitting awkwardly on the bridge of the nose and when combined with the low grade cyborg-like MP3 player on the sides of the glasses, you feel like you are the butt of a joke you don't quite get.

The headphones that come with the glasses are fairly terrible as they tend to cut off quite a bit of treble and bass on both ends of the spectrum. Even the mid tones aren't terribly impressive and the volume comes up shy of an acceptable level. In an environment with high ambient noise, these headphones nosedive to deplorable levels, becoming hard to hear and even harder to tolerate.

The MP3 player is so incredibly featureless. It plays MP3, WMA and ADPCM and that's about it. There's an Mp3 recorder too but unless you are in a quiet area, the recording quality is fairly useless. As if the lack of features wasn't enough, the glasses are only 256MB so after you get your 60 songs on there you can rejoice at how brilliantly inadequate the storage is. There is also a 512MB version but we live in the age of 4GB flash drives. The SanDisk Tranflash cards are wafer thin and smaller than the finger nail on your pinkie finger. Surely we can do better than 512MB.

Not only is the playback a drawback, not only does the audio quality hurt the brain with its mediocrity but the buttons to access all these fine features are confusingly stupid and non-responsive. The on/off button is also the play/pause button, the random playback button is also the delete button, the decrease volume is also the previous track button, the forward track is also the increase volume and so on and so on. Each button works based on how long you press it but there is no audible tone to tell the wearer that the unit has recognized you have pressed a button and since you obviously can't see the fancy lights on the side of your head, you never know what's going on with the unit at any one time. The anger and frustration that swells when using this product could make baby kittens cry.

The battery life is okay, rated at about 8 hours of playback but the recharge time of 2 hours isn't the best. Also, one of the only good points of this product is the extra lenses which easily clip on and off while still remaining rather sturdy. There is also a reinforced nylon soft vault included in the package (also known as a case) but it's so chunky that it would only be useful if kept in the car and is impossible to carry comfortably in the pocket.

We also had issues with the installation software which repeatedly crashed our machines but even when it didn't, the splash screen dominated the whole screen with the installation dialog hidden in the background, only accessible by pressing control-alt-delete and shutting it down manually.