Is Nokia's N85 a better mobile phone than the flagship N95? 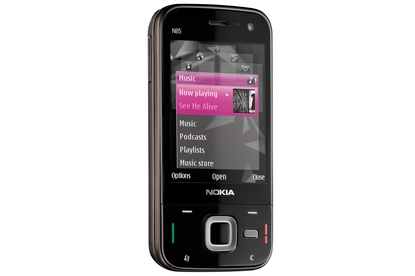 It's not a revolutionary product, but Nokia's latest N-Series handset, the N85, is smaller, cheaper and has better battery life than the top-of-the-range N96. If you're after a fully fledged multimedia phone with most of the latest features, the N85 is hard to ignore.

Nokia's latest N-Series handset is similar to the flagship N96. However, the N85 boasts an OLED display, a built-in FM transmitter and better battery life than the N96.

Although both of the handsets are dual-sliders and have a similar shape and finish, the N85 is smaller, thinner and lighter than the N96. This makes it easier to pocket and a little more comfortable to hold in your hand. The gloss black finish remains, as does the rear casing etched with a stylish, wavy pattern. Build quality is average and although the slider feels smooth, it rocks slightly from side to side.

The buttons and controls are the same apart from the N85 losing the music playback controls surrounding the five-way navigational pad. The handy keypad lock slider remains, but it has been moved from the top of the handset to the right side. Sliding up reveals the keypad, while sliding down reveals four multimedia keys which morph depending on the application you are using. The N85 also boasts an accelerometer that rotates the orientation of the display when the phone is tilted.

At 2.8in, the N85's screen is slightly smaller than the N96, but this doesn't have a big impact on the user experience. More importantly, the display technology used is OLED rather than the traditional TFT screen found in most phones. It is supposed to use less power than regular LCDs, and the clarity and colour of the screen are excellent. Our main complaint is its performance in direct sunlight — at times it can be almost impossible to see.

The N85 runs the popular Symbian Series 60 software and it is extremely easy to use. It does suffer from lag at times, especially when opening and closing applications, but it doesn't have a significant impact on the overall user experience.

Features are aplenty, headed by Wi-Fi, Bluetooth with A2DP, USB with a standard micro-USB interface and HSDPA capabilities. A built-in GPS receiver with A-GPS is also present and the Nokia Maps application is preinstalled, enabling you to search for addresses and locate POIs. Users receive a three month free trial of full turn-by-turn navigation before a subscription fee is required. Be warned, though: A-GPS is a network feature that requires a data plan, so watch your additional charges if you are a frequent GPS user.

A 5-megapixel camera with a Carl Zeiss lens is unfortunately let down by the lack of Xenon flash, with Nokia opting for a dual LED flash instead. A lens cover — absent on the N96 — is a welcome addition though.

Multimedia is excellent, aided by the inclusion of a 3.5mm headphone jack. There is an FM radio, and a built-in FM transmitter means you can wirelessly stream your music to any radio. This feature is particularly useful in the car, for example. Unfortunately, the convenient kick stand seen on the N96 hasn't been included, though the N85 remains a very capable video player. There also isn’t any internal flash memory, but Nokia includes an 8GB microSD card in the sales package to compensate.

Finally, battery life is much better than the N96, with the N85 being equipped with a 1200mAh battery rather than the 900mAh one on the N96.