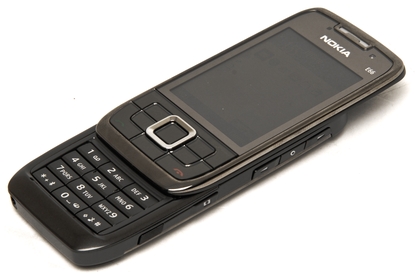 If you don’t consider a QWERTY keyboard a necessity, then the E66 is one of the best smartphones on the market. It combines a stylish design with the latest features and it is a breeze to use.

Boasting the same features as the E71 minus the QWERTY keyboard, Nokia's E66 is aimed at users who aren't hell-bent on large amounts of text entry. This stylish E-Series handset has the same internal characteristics as its big brother in a smaller, more pocketable form factor.

Like the E71, the E66 is one of the more stylish smartphones to hit the market. It features the same gloss metal finish as its larger counterpart but does away with the QWERTY keyboard in favour of a regular numerical keypad. Particularly impressive is the chrome rear cover, despite its tendency to attract plenty of fingerprints. Although the E66 oozes style, its build quality is somewhat questionable — the top half of the slider in our review unit didn't feel as sturdy as we expected.

For those who lament the extra real estate that keyboards occupy, the well-designed keypad of the E66 will certainly be appreciated. Tactile feedback is excellent and the layout is simple yet effective. Unlike the E71 the keys aren't spongy, generating a firm clicking sound when pressed. The shortcut keys — home, calendar, contacts, mail and delete — are a welcome addition, and the five-way navigational pad, selection buttons and call keys combine to create a pleasant user experience. When in standby mode, all keys except the answer and end call buttons are invisible; they only light up when the screen is active.

The display is a reasonable size considering the style of the handset, but it's perhaps a little smaller than the screens of other smartphones. This really isn't much of an issue as the display is excellent for almost all uses, including displaying videos and photos.

The E66 runs on the popular Symbian S60 platform, so it includes most features synonymous with smartphones. Among these are the ability to read and edit Word, PowerPoint and Excel documents and access PDF files. One of the best features of this handset is its speed — an impressive attribute that we've noticed in many of the latest Symbian devices. Applications open and close in a flash and despite running multiple programs we didn't experience any lag. The default menu interface isn't as visually appealing as other handsets, but a wealth of Symbian themes can be downloaded to smarten it up.

In terms of features, the E66 should satisfy even the most demanding user. In addition to HSDPA connectivity, Wi-Fi and Bluetooth with the A2DP profile are available. The handset works with Microsoft Exchange Server as well as e-mail accounts like Gmail and Yahoo! Mail. Setting up an e-mail account is easy; entering your name and password automatically searches for the settings required, and we were up and running in just a couple of minutes. The E66 also includes a GPS receiver along with the Nokia Maps application.

A great feature is the ability to switch between business and personal modes. You can edit a number of settings, including enabled applications, notifications and themes. You can then toggle between the two modes — for example you could block access to your work e-mail while using the personal mode.

The E66 is a fair but not outstanding device for multimedia. It has a 2.5mm headphone jack, but you'll need to purchase an adapter in order to use a standard pair of headphones. The 3.2-megapixel camera with flash and autofocus is handy and you can save your photos to the 2GB microSD card included in the sales package. For Web browsing, the Nokia browser conveniently supports flash. Navigation, despite the lack of a touch screen, is excellent. We managed to browse sites like YouTube without any major issues.