An affordable business smartphone based on the popular Nokia E71. 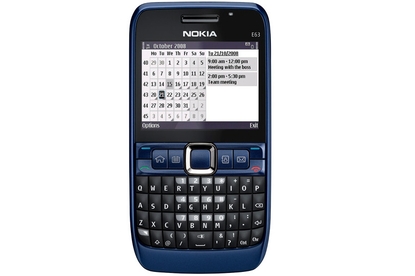 The Nokia E63 is a cut-price version of the E71. It lacks HSDPA-connectivity and built-in GPS but retains much of the Nokia E71's design, including a full QWERTY keyboard. If you're on a budget and can live without super-fast mobile Internet speeds then it is definitely worth a look.

Nokia's latest Eseries mobile phone is the little brother of the more powerful and slimmer E71. Commanding an outright price of under $400, the Nokia E63 retains most of the Nokia E71's design traits — including a full QWERTY keyboard — but it lacks built-in GPS and HSDPA connectivity.

The Nokia E63 is quite similar to the Nokia E71 in terms of its design, though it’s thicker and is made of plastic rather than shiny metal. This means it is less prone to fingerprints, but it doesn’t feel as solid or sturdy as the Nokia E71.

The full QWERTY keyboard is comfortable to type on, but the spongy keys will not suit everyone. The individual keys are slightly squashed but do provide reasonable tactility. A particular issue is just how close the first and last column of keys are to the edges of the handset, and, annoyingly, the space bar has been shrunk when compared to the Nokia E71. The shortcut keys — home, calendar, contacts and mail — remain, as do the five-way navigational pad and selection buttons, but there are no side volume controls or buttons.

The Nokia E63's display is slightly smaller than the E71's, but it retains an identical resolution and offers similar performance. It isn't outstanding, but viewing angles are good and its performance in sunlight is passable.

The Nokia E63 runs the popular Symbian S60 platform, and it includes plenty of business features, including the ability to read and edit Word, PowerPoint and Excel documents and access PDF files. One of the best features of the Nokia E63 is its speed — applications open and close in a flash, and despite running multiple programs we didn't experience any lag or slow down. The menu interface isn't as visually appealing as other competing smartphones, such as RIM's BlackBerry Bold 9000, but there are plenty of Symbian themes available to download.

The Nokia E63 commands a much lower price point than the E71 and as a result lacks some of the latter's features; namely, built-in GPS and HSDPA connectivity. While we can live without GPS, HSDPA connectivity should be standard fare in a business device, so this is definitely a big omission. The Nokia E63 is still 3G-capable, but the maximum data speed is just 384Kbps. If you're a heavy mobile Web user you'll definitely notice the drop in speed. Thankfully, Wi-Fi and Bluetooth with A2DP are included.

The Nokia E63 works with the Microsoft Exchange Server in addition to personal e-mail accounts like Gmail and Yahoo! Mail. Setting up an e-mail account is a hassle-free experience, as after entering your name and password it will automatically search for the settings required. Despite the lack of a built-in GPS receiver, the Nokia Maps application is still included on the Nokia E63.

The handy mode switcher present in the Nokia E71 is also found on the E63. You can switch between business and personal modes and edit a number of settings including enabled applications, notifications and themes. You can then toggle between the two modes — for example you could block access to your work e-mail and tools when in the personal mode if you wish.

The Nokia E63 is a handy multimedia device and has a standard 3.5mm headphone jack — the first we've seen on a Nokia Eseries device. The screen displays video quite well, but it's a little small to use frequently. The camera has been downgraded to 2 megapixels and a fixed focus, but it does include an LED flash and self-portrait mirror. The E63 also has a flashlight function that allows the camera flash to be used as a torch, activated by holding down the space bar.