Sleek and elegant clamshell with an automatic opening mechanism. 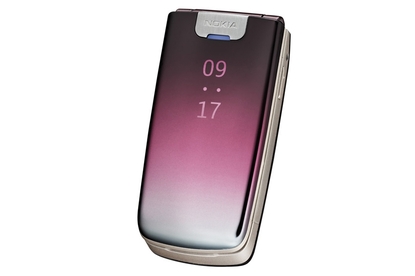 The 6600 Fold is style personified. This mid-range 3G handset may not offer a wealth of features, but its design, OLED display and build quality will appeal.

A mid-range 3G mobile sporting an extremely stylish frame, Nokia’s 6600 Fold doesn’t offer any real outstanding features, but it should appeal to fashionistas regardless.

The 6600 Fold is definitely an attractive device. The clamshell handset feels rock solid and it’s finished in a mirror-style surface complete with silver edging. The build quality is superb; in particular, the hinge feels strong thanks to a metal design. A button on the right side of the handset can be pressed to open the flip, so you don't need to dig your finger into the side when you want access to the screen and keypad.

Our review unit was finished in an attractive “sophisticated purple” colour scheme, but the unit is also available in black. The metallic, mirror-style finish on the front camouflages a convenient OLED display, which shows a clock, incoming caller ID, missed calls and an SMS notification. In a nice touch, double tapping the front of the handset illuminates the clock and can also be used to set the alarm to snooze, as well as silence and reject calls.

Flipped open, the deep purple colour continues to the display and keypad surrounds, further enhancing the 6600 Fold’s fashion credentials. The controls are fairly straightforward — a five way navigational pad, dual selection buttons and answer/end call keys — but we found the navigational pad a little small and noticed it creaking when pushed in certain directions. The keypad does this too, but its design is much more effective. Large, well-spaced buttons provide excellent tactility and therefore a comfortable SMS and dialling experience.

The 6600 Fold runs the familiar Symbian Series 40 user interface, so those used to Nokia phones will be pleased. A standard 3x3 grid layout adorns the main menu, with a list format for most submenus. Although speed isn’t a hindrance, the 6600 Fold is slightly slower than we expected, especially when browsing through lists. Thankfully, there is no sign of keystroke lag while text messaging. The screen is excellent, possessing notable viewing angles and displaying bright, vivid colours.

Features are relatively standard, though this isn’t necessarily cause for complaint. A 2-megapixel camera with 8x zoom and dual LED flash is one of the highlights, while an internal VGA camera can be used for video calling across a 3G network. Nokia has included a number of applications with the 6600 Fold, including Nokia Search, Nokia Maps and Yahoo! Go. There is no GPS receiver built-in, but you can easily connect to an external GPS receiver via Bluetooth if you wish.

Perhaps the only other standout multimedia feature is the music player; in addition to supporting a variety of file formats there is an FM radio. Unfortunately, the multimedia features of the 6600 Fold are let down by Nokia’s reluctance to include a regular 3.5mm headphone jack. Instead, a micro-USB port is used, though an adapter included in the sales package does allow the use of standard headphones. Files can be stored on the included 512MB microSD card, but its slot is annoyingly located beneath the battery.