Can Nokia's 5800 XpressMusic -- its first touch screen mobile phone -- shape up as an iPhone 3G killer? 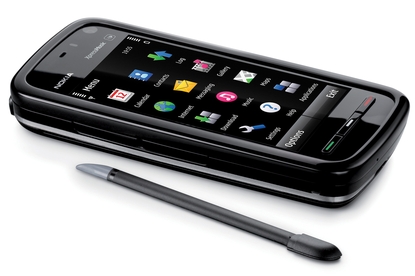 Nokia's first touch-screen mobile phone, the 5800 XpressMusic is not an iPhone killer but it’s provides a solid building block as Nokia moves into this space. This smartphone packs in plenty of features, but it falls short in terms of usability due to the resistive touch screen and an unorthodox text input method.

Touch screen mobile phones are all the rage at the moment and Nokia has finally jumped aboard with the 5800 XpressMusic, its first ever full touch screen handset. This device brings a reasonable set of features, and the 5800 XpressMusic is a fair effort, but it has a couple of interface quirks that prevent it from seriously competing against Apple's iPhone 3G.

The Nokia 5800 XpressMusic has a fairly standard design for a touch screen device, with the display consuming most of the phones' front screen. The build is largely plastic, and our review unit had a dark brown and red finish. The handset is reasonably solid, although it doesn't feel as well built as the Apple iPhone 3G. In particular, the plastic flaps covering the SIM card and microSD slots are rather flimsy, while the slider button — which activates the keypad lock — sways from side to side when pressed.

The Nokia 5800 XpressMusic has three physical buttons below the display (the answer, menu and end keys), as well as dedicated volume and camera buttons, the aforementioned unlock slider and a power key. Holding down the menu button brings up a the application manager, which allows you to close currently running programs. There is also a touch-sensitive button just above the display that drops down the Media Bar, providing quick access to the music player, gallery, share, video centre, and the Web browser. Pressing this button will drop down the media bar no matter what menu or application you are in — a handy feature. The display produces excellent colour and clarity and it looks superb for videos and photos. Unfortunately, it doesn’t fare so well when viewed outdoors, with poor visibility in direct sunlight situations.

The user interface on the Nokia 5800 XpressMusic is a mixed bag in terms of features and responsiveness. The interface looks impressive, the icons are well laid out and scrolling is smooth. You can customise the home screen theme to display a shortcuts bar, contacts bar or a basic screen. A contacts bar allows you to add four contacts (including a picture) onto the home screen, while the shortcuts bar provides instant access to four applications. Icons to quickly access dialler and contacts are loacted at the bottom of the screen. The built-in accelerometer rotates the screen orientation in most applications and does so without much delay or lag.

The biggest interface issue is in regard to the touch screen itself — the Nokia 5800 XpressMusic uses a resistive touch screen and not a capacitive touch screen found in devices like the Apple's iPhone 3G and HTC's Dream. This means you have to press rather firmly to make a selection, although Nokia has included a stylus to assist in use. There is also adjustable haptic feedback, with three intensity settings available. In our tests, the interface overall was responsive, but the selection of buttons is not consistent. For example, accessing shortcuts on the home screen requires just one press, but selecting the inbox in the messaging menu requires a tedious double tap.

The messaging feature is certainly usable, but it's not as efficient or effective as the iPhone 3G's on-screen keyboard. Creating a new message gives you a similar screen to many non touch-screen Nokia handsets. Pressing on the text entry section of the page takes you to a different screen, where you can choose from four text input methods — handwriting with the stylus, a mini QWERTY keyboard, a full screen QWERTY keyboard and an alphanumeric keypad with T9 support. In our tests we found a combination of the last two methods the best messaging technique, although the full QWERTY keyboard requires you to have the phone in landscape mode. Once you've entered the text on this dedicated page, tapping the tick button will take you back to the regular compose message screen. It’s a slightly unorthodox message composition method overall and does take quite some time to grasp this technique.

The Nokia 5800 XpressMusic features Wi-Fi, Bluetooth with A2DP, USB with a standard micro-USB interface and HSDPA capabilities. A built-in GPS receiver with assisted-GPS is also included and the Nokia Maps application is preinstalled, enabling you to search for addresses and locate points of interest. The included Web browser is reasonable but it doesnt render pages or scroll as well as the the browsers seen on Apple's iPhone and HTC's Dream. The 3.2-megapixel camera has a Carl Zeiss lens, but it lacks a Xenon flash, with Nokia opting for a dual LED flash instead.

Multimedia functionality is excellent, and it is aided by the inclusion of a 3.5mm headphone jack and an FM radio. The media player is similar to the one seen in most Nokia's N-Series handsets, displaying album art and allowing the adjustment of multiple settings including bass boost, stereo widening and a five-preset equaliser. For media storage, Nokia includes an 8GB microSD card in the sales package, but the slot is expandable with cards up to 16GB.