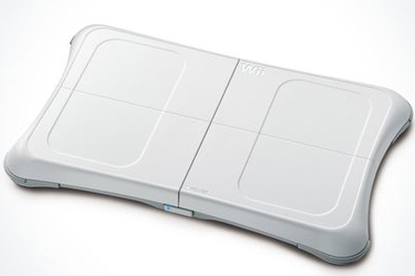 For those who are fairly sporty anyway, the Wii Fit may end up more of a check-and-balance device rather than a full-on trainer, as it seems not to have endurance tests and actively slowed us down when jogging. For all that, it's a brilliant idea. Wii approve.

While not exactly a lazybones, we've fallen out of the gym routine sufficiently to know better than to sign up for another pricey membership, but we'd like to tone up a bit and supplement regular swimming and other light exercises. The Wii Fit proved to be just the thing.

Wii Fit consists of a balance board and an exercise mat plus the software. The balance board takes four AAA batteries whose life is prolonged by going into standby mode between uses.

The Wii Fit Plaza screen acts as the central management area where you register for your fitness regime and choose a Mii avatar if you haven't already assigned yourself one with your existing Nintendo Wii setup.

Press your big toe against the power button conveniently located at the back to power it on and synchronise with your Nintendo console. As well as between some exercises, you generally need to reactivate the power button when switching between users as it needs to recalibrate for the new user.

After entering a few basic details — age, height and gender — you are prompted to remove your socks and step on to the balance board to be weighed. The board is quite sensitive and you're asked to estimate how much your clothing weighs it can be taken into account. If you don't hold steady while your weight is being calculated, you'll be admonished: as one of the key aspects on which the Wii Fit assesses you is balance and weight distribution.

For people like your author with weak lower-back muscles from too many hours at a desk, plus aches and pains from lugging heavy laptops and review kit to and fro, a chance to redress the balance and even up the body was very welcome.

You can choose the exercises you want to do, although it pays to combine several types. As you progress through each task and go from being a mere 'dwindling star' to 'amateur' and beyond, you unlock additional exercise — some in the same category such as more advanced yoga stretches; others might be in the muscular workout or balance category.

We were particularly pleased with the mix of breathing exercises and stretches. The balance and coordination exercises such as the table tilt and ski slalom felt more like games with the associated sense of achievement as you top the leader board or learnt the importance of subtle, controlled moves. More traditional exercises offered include the discipline of a step routine, a jog around the park or floor work.

The Wii Fit Plaza is where you can access a graph showing the exercises you've done plotted against the timescale you've set yourself to get fit and lose weight. You can adjust your training regime but not until you've completed two weeks of training.

The Wii Fit in any case warns you if it thinks you're setting yourself an unrealistic training goal and, if has to be said, we found the assessment of ideal weights and body masses fairly generous.

(Adding an inch to my partner's height meant his body mass index rating dropped from a little on the high side (25.08) to ideal at 22.4, while I was surprised to find myself listed as in the target range despite having acquired quite a few pounds in recent months.)

We suspect a bit of figure massaging is happening to make the Wii Fit's intended audience of couch potatoes get up and go, rather than depress the hell out of them and have them reaching for a bag of crisps.

The Wii Fit encourages you all the way with a timely enquiry about the hours you keep should you log on late at night and a quick check on whether you've had your dinner and if you've warmed up sufficiently.

Most importantly, the Wii Fit doesn't feel like a trial — in fact, the opposite applied and we were told to take a break once we'd clocked up 45 minutes. For those of us who aren't natural gym goers or team sports players this is progress indeed.