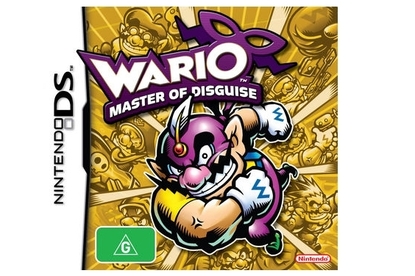 Wario Master of Disguise is a surprisingly lacklustre title from the usually reliable bods at Nintendo. There is some fun to be had, but we were expecting a bit more.

At first glance, Wario: Master of Disguise seems like a basic platformer in the tradition of Wario's red-capped cousin.

It quickly becomes apparent, however, that this game is no generic re-hashing of a familiar formula.

The premise is simple: Wario is sucked into his favorite TV show about an over-the-top thief named the Silver Zephyr, steals the Zephyr's magical wand and then aims to steal everything that isn't nailed down. The plot is bizarre, as is to be expected in a Wario game, and generally isn't interesting enough to pay attention to through the hackneyed dialogue scenes.

The disguises are varied and offer up some cool abilities, most of which have you making good use of the stylus. Astronaut Wario is a good offensive option with his laser for clearing out enemies and is also useful for shooting switches and other puzzle elements. Artist Wario is immobile, but he lets you draw blocks with the stylus anywhere on the screen which can be used to trigger far off pressure switches, reach higher platforms, or even block line of sight for a patrolling guard. The Silver Zephyr's mechanical contraptions make up the boss fights throughout the game, and each one will require you to make creative use of one or more of your disguises.

The gameplay stays varied throughout, but Master of Disguise ends up feeling a little gimmicky due to uninteresting characters, plot, environments and graphics. The only real motivation to keep playing are the creative disguise abilities and fun touch screen elements you discover early on. There are 8 different mini games to play whenever you unlock a treasure chest, but these are easy and only mildly entertaining at best. If you're looking for a unique platformer with some enjoyable touch-screen gameplay, Wario: Master of the disguise is a decent choice, if a little rough around the edges.