Mario's reptilian nemesis finally gets his due 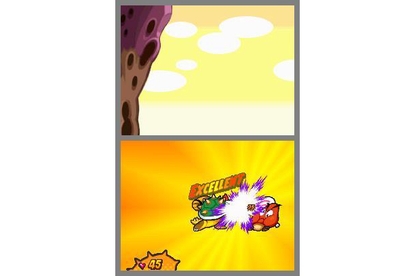 Bowser's Inside Story is a game that will have you laughing one moment and cursing the next but you'll enjoy doing both.

Although he's caused Mario and his friends all kinds of headaches, King Bowser has slowly evolved into one of the most lovable characters in the Nintendo universe. He's lived in Mario's shadow for most of his career but he's finally getting some much deserved time in the spotlight in Bowser's Inside Story, a wacky RPG that centers on the self-centred and wilfully stupid monarch.

Beauty and the Beast

The beauty of Bowser is that he is not burdened with an excessive backstory nor is there an ill-conceived attempt to give him a complex personality. Bowser is a struggling 'everyman' who only wants to get some respect in a frustrating world. Easily tricked and abused by his enemies, it's hard not to feel sorry for him.

Your mission in Bowser's Inside Story is to help him stop failing at life, if only by a little bit. In battle you'll help Bowser maul his foes with mighty punches, scorching firebreath, and swarms of his tiny minions. When he fails, Bowser is often helpless until Mario & Luigi-accidentally devoured by Bowser earlier in the game-can do something to help him. They might play a mini-game to give Bowser a burst of strength or use an adrenaline rush to grow him into a lumbering giant.

Battle and mini-games in Bowser's Inside Story are all about gruelling precision, in stark contrast to the cartoony graphics and goofy plot. Even common enemies demand careful counter-attacking and blocking. Most activities boil down to your ability to press exactly the right button at exactly the right time. These challenges are rewarding if simple. Other bits that involve frenzied button-mashing or stylus-swiping are far less memorable.

The plot mostly concerns Bowser's attempts wrest control of his destiny back from the endlessly quotable Fawful, who's trying to conquer the Mushroom Kingdom using the goofiest methods possible. Fawful isn't new to Bowser's Inside Story but he really takes on a life of his own here, hilarious in every single appearance. The whole game manages to be funny from beginning to end, a feat few games can manage.

Bowser's Inside Story is a game that will have you laughing one moment and cursing the next but you'll enjoy doing both. The cutscenes and challenges are equally entertaining, if in very different ways. Bowser's Inside Story works hard to make sure it's never boring or mindlessly repetitive and quite nearly succeeds. It's a must have for any DS owner, especially fans of the Mario universe.