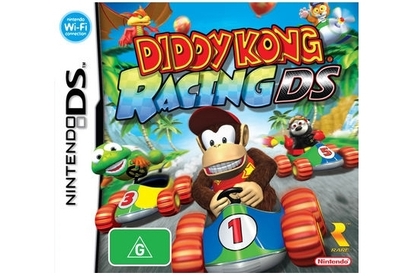 Diddy Kong Racing DS had lot of potential but fell short in delivering a solid racing experience. If the controls weren't so frustrating, the game play experience would have been a lot more enjoyable. Save this for a used-game price or a rental -- spending the retail price for it won't be worth it.

DS fans have been waiting patiently for another "smash hit" character racing game to arrive, so when Rare's Diddy Kong Racing was announced for the Nintendo DS, we thought it would be a great addition to our carefully built DS library. Oh, how wrong we were! At least, how wrong we were to believe that Diddy Kong DS could even begin to measure up to Mario Kart DS's trail of victory.

This game is not a complete failure; oh no, we've seen worse in our day. Diddy Kong Racing has its own charms and we actually had a lot of fun mixed with frustration when playing. Unfortunately, the controls destroy what very little that this game had to offer.

One of the saving qualities of Diddy Kong Racing DS is the multiple vehicle feature. You can drive a car, fly a plane, or hover with ... a hovercraft. Each vehicle requires you to do something to the touchpad at the start of the race in order to turbo boost off the starting line. It's the same idea as Mario Kart, but using the touchpad can be quite frustrating.

Throughout these challenges you will collect coins to sup up -- we mean, upgrade -- your vehicles. These upgrades will help the handling, acceleration or top speed of your vehicle, as well as give it a customised look that might actually be destructive to the performance of your vehicle. But hey, if it looks cooler, why not?

Let's get down to racing

The racing experience itself -- obviously the most important part -- is a jumble of mixed emotions. On one hand, the racing itself can be fun; the versatility of the different vehicles gives players a fun challenge in getting used to the physics of each vehicle. Diddy Kong Racing DS also has colour-coded balloons that let you choose your weapon: red balloons usually yield missiles, blue balloons speed boosts, and so on. However, perhaps our biggest peeve is the messy, ill-wrought touch pad controls, especially those available to you in the Touch Challenges. On frustrating example is in the car-based Touch Challenge, which requires you to draw the driving path for your vehicle while you accelerate via trying to spin the oddly angled wheel that pops up on your screen. For some reason or other your character will go flying off the gorge in the top screen -- a gorge you didn't know existed because it looked like the wall of a canyon on your bottom screen. If Rare had made Diddy Kong Racing DS a completely touch-based game, it would have been a complete disaster.