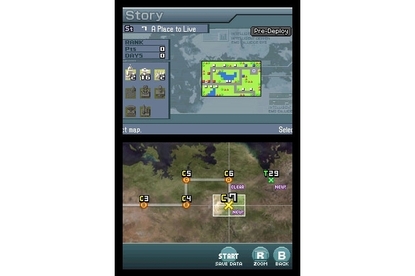 Days of Ruin is a great return to the classic turn-based franchise. The additions and refinements to the formula are stellar and it's yet another gem in the DS Lite's already impressive library.

One of the best handheld strategy franchises is back and better than ever. Strap yourselves in for our in-depth review of Days of Ruin, a game guaranteed to keep you up until all hours of the night!

For the uninitiated, Advance Wars: Days of Ruin is a turn-based strategy game that features cartoon-style graphics but possesses a surprising amount of strategic depth. Days of Ruin, the fourth game in the series and the second for the DS, continues this fine tradition and will entertain gamers of all types.

Previous Advance War games have treated war with a swashbuckling, Saturday morning cartoon approach. Days of Ruin, on the other hand, stands in dark, stark contrast: the story takes place in the aftermath of a catastrophic meteor strike that has killed most of the world's population and destroyed the world's atmosphere.

Throughout the course of the game's 26 campaign missions, you will fight with and against various military factions that survived the catastrophe in repeated attempts to rescue and protect as many survivors as possible. There are also 30 "trial" missions which are accessible from the campaign map and can be played at any time.

War in the apocalypse

Despite the sinister overtones of the narrative, the gameplay remains faithful to the Advance Wars series. Short cut scenes provide context and narrative before and after each battle and the battles themselves are fairly straightforward affairs.

During each turn, you manoeuvre your air, ground, and naval units into offensive or defensive positions and then attack. By securing neutral and enemy buildings, you can earn money which can be spent at factories to produce more units. Objectives range from securing specific locations to destroying all enemy units.

There are also six new units available in the game, which adds a nice touch of welcome variety. The Motorbike is similar to the Recon unit, but allows you to capture buildings. The Flare is a new armoured vehicle that can fire a flare into an area to eliminate fog of war. The Anti-Tank is a powerful artillery-style unit that can counter-attack from a distance. The War Tank is a massively powerful armoured vehicle. The Duster is a multi-purpose plane that can attack both air and ground targets. The Ship Plane is a multi-purpose unit that can be built by Carriers.

In a subtle shift that increases strategic depth, Days of Ruin also reduces the impact and effect of special attacks. Tag powers -- game-changing specials that allowed commanders to make two moves in one turn -- have been eliminated, and while CO special attacks remain, they are less likely to turn the tide of battle.

And of course, the greatest addition that Days of Ruin brings to the table is Wi-Fi multiplayer. This is a first for the series, and allows you to play against other DS gamers. Over 100 multiplayer maps are included with the game, and Days of Ruin even allows you to build and share your own custom-made maps, which adds a tremendous amount of variety and depth.