The Nikon D3000 isn't designed to 'wow' people, but instead to teach people. It's a digital SLR camera with in-built guides that can help novices select the appropriate shooting mode and settings depending on the style of photo they want to take. It's image quality is good overall, but it's no match for a mid-range D-SLR.

If you’re an enthusiast photographer and want to learn more about how to take photos in different situations, there is probably no better camera to get your hands on than Nikon’s D3000. It’s an inexpensive digital SLR camera with manual features, but it also packs a useful Guide mode that you can use to change the camera’s settings for different scenarios.

The Guide mode is much better than reading the manual: you can just bring it up anytime, anywhere, and follow the on-screen instructions to get the shot you desire. You don’t even need to learn anything from it — just follow the steps. But if you do pay attention to the settings that can be changed for each particular type of shot, then you can park the mode dial in manual mode and adjust each variable for yourself.

The Nikon D3000's body doesn't have as many dedicated dials and buttons as a mid-range digital SLR, but you quickly learn what you need to do in order to change the settings swiftly. The body has a thumb dial for changing the shutter speed and lens aperture, and you can use the LCD’s on-screen menu to manipulate the ISO speed, exposure compensation, white balance, metering and focus mode. It has a relatively small body for a digital SLR (approximately 12.2cm wide, 9.6cm tall and 7.7cm deep), but of course, it will become bloated depending on the lens you choose to attach.

It will accept any Nikon DX-format lens and will autofocus with AF-S type lenses, but not with AF types. It's best to use lenses with built-in vibration reduction, as the Nikon D3000's body does not have optical image stabilisation built in. The sensor of the camera is 10.2 megapixels, which is more than enough pixels for printing large photos.

Photos can be composed through the optical viewfinder and they can be played back on the 3in LCD screen. The screen sits in a fixed position on the back of the body, so it can't be flipped out and rotated like the screen on the Nikon D5000, for example. Furthermore, it does not support LiveView, which means you can't take video nor shoot still images in the same way you would with a compact camera's LCD viewfinder.

The lack of a flip-out screen and video mode might be seen as a drawback by some, but we prefer looking through the viewfinder, especially on sunny days. We don't care much for the video mode on still cameras, either. But if you do want video, then the Nikon D5000 is a better proposition.

We tested the Nikon D3000 with one of its kit lenses — the AF-S Nikkor 18-55mm 1:3.5-5.6G — as well as some non-kit lenses. The overall performance of the camera — taking into consideration its user-friendliness, features and image quality — was good. In no way is its image quality as good as a mid-range digital SLR (such as the Nikon D90), but it's still better than what you can get from an advanced compact. 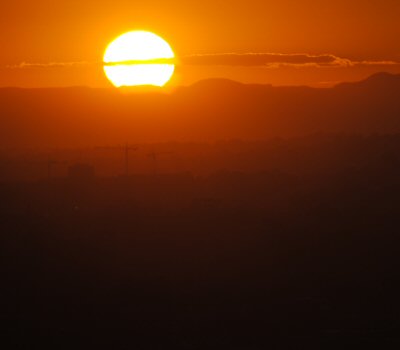 The D3000 calculated the exposure automatically for this sunset. Apart from some cropping and resizing to fit this page, it has not been edited. Credit: Imogen Stuart.

We used the semi-manual (aperture priority and shutter priority) and full manual modes for our tests and came away with some good images. Colours were vibrant and clarity was high. Low-light shooting will leave you with noisy pictures if you bump the ISO to 400, but the noise doesn't get too much worse as you make your way up to ISO 1600. However, it will be more noticeable if you view or print your photos at a large size. 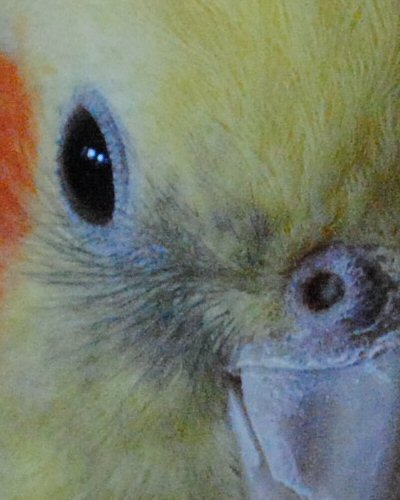 This is a 100 per cent crop of a cockatiel that was photographed in dim lighting with an ISO speed of 1600. You can see that the definition of the image is still quite good, but there is slight discolouration visible (red blotches) just above the nostril. Overall, it's not bad low-light performance for an entry-level D-SLR.

The noise isn't a bad thing in some cases, as it can actually give your pictures a nice film-style look. The colours, too, can be adjusted, so you don't have to live with vivid colours if you prefer more natural-looking tones.

There are many in-camera editing options to play with. While they are a novel idea, the edits are displayed in a split screen with the original on the left, which makes it hard to see what the changes actually look like. You still can't use this as a substitute to computer-based colour adjustments. Some filters can be used to manipulate your photos in a fun way, including the stop-motion filter, which creates a stop-motion video from a series of your photos, and also the miniature filter, which can be used to make objects such as buildings look smaller than they are. 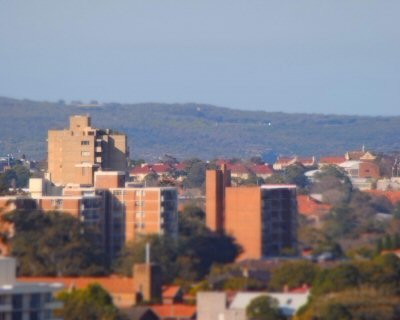 We used the miniature filter on this photo. The filter blurs the top and bottom of the image, while leaving your defined area in focus. The area you can define is fixed in size, but you can position it anywhere along your photo to create the miniature effect.

Despite the D3000 being an entry-level digital SLR, its performance is still quite good. It will shoot at just over two frames per second in continuous mode (and slightly faster for the first 10 or so shots it takes), and its focusing engine is swift and accurate. It features 3D tracking, which works very well — even in relatively dim lighting — to track your subject throughout a frame, as long as the subject stays within the 11 focus points of the sensor. It’s very useful when taking photos of pets, for example, but it also works a treat for candid portraits of humanoids.

Priced at $799 for the body only, the Nikokn D3000 may not have as many dials and buttons as a mid-range digital SLR, but it's a worthy model for anyone who wants to make the leap from a compact camera. Single and twin lens kits are available for $999 and $1299, respectively.