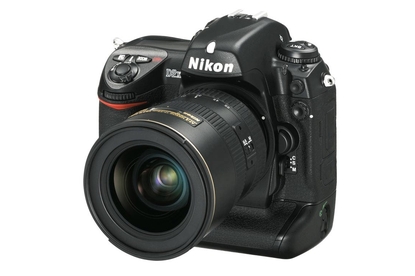 While most of us can only dream of owning a high-end digital SLR like the Canon , for professional photographers the high price tag is more than repaid in the extra power and reliability these cameras provide. While Canon owns the lion's share of the professional market, Nikon is making a very strong bid for photographers' attentions with its latest, the D2X.

With the D2X, Nikon has taken a punt on the continued usefulness of non-full-frame sensors. Its 23.7 x 15.7mm CMOS sensor packs in 12.2 megapixels of resolution, while Canon's 1Ds Mk II gets 16.4 megapixels from its full-frame, 36 x 24mm sensor.

The D2X marks Nikon's shift to CMOS sensors. Canon is on its second generation of CMOS sensors and has a clear lead in technology here, but Nikon's move to CMOS is an impressive debut. The D2X can match Canon's sensors for low image noise from the low ISOs up to ISO 800. Beyond that, at ISO 1,600 and 3,200 (which are called HI-1 and HI-2 on the D2X) it cedes ground to the Canon, but not in a dramatic fashion.

The Nikon D2X is really two cameras in one. The demands of sports photography are a little different to studio work, yet the D2X attempts to cover both bases by offering an intriguing high-speed crop mode. With this enabled, it boosts its maximum shot speed from 5 frames per second to a speedy 8fps by reducing the maximum image size to 7 megapixels (a rectangle in the focus screen shows you the area of the image captured in high-speed crop mode).

The D2X's body leaves little to be desired. It is solid, with a magnesium alloy inner structure and heavy-duty plastic and rubber outer covering. You get an excellent 2.5-inch colour LCD with a clear protective cover and two monochrome LCDs for displaying settings, one on top of the camera and one at the rear, beneath the colour LCD. Control layout is superb, with all major functions quickly accessible from buttons. The essential controls are duplicated for vertical orientation shooting. The lithium-ion battery pack offers superior battery life while being comparatively light; the D2X with battery weighs 1.25kg.

In terms of functionality the D2X offers a clear and very functional menu system and a wide selection of custom functions. You can also store custom settings in four sets (called 'banks' in Nikon's parlance), which, while labelled A to D by default, you can rename with your own function-specific descriptions, making swapping between setups very easy.

We were lucky enough to be able to mount a Nikkor AF 80-200mm F/2.8 zoom lens on it and the results from a weekend sports fixture were superb. Whether shooting in RAW or JPEG, the D2X delivered crisp images that showed impressive dynamic range, oodles of detail and, thanks to its 11-point auto focus and continuous AF mode, were tack sharp even when tracking fast-moving subjects. The Nikon D2X may cede some megapixels to the Canon 1Ds Mk II but there's no denying it takes great photos.