Nikon COOLPIX S1100pj: Show off with this 14.1-megapixel Nikon compact camera, which has a built-in projector It may not be the most practical digital camera, but if you're a gadget nut then Nikon's COOLPIX S1100pj is almost a must-have item. It's not without its drawbacks, but it'll definitely make your friends 'ooh' and 'ahh' when you use the integrated projector to display the photos you took of them, and its overall picture quality is quite good.

You might think a digital camera with a built-in projector is merely a novelty, but if you get the chance to play with the Nikon COOLPIX S1100pj you will realise just how great it can be to share photos by shining them onto a wall or your friend's overly large forehead. Indeed, the COOLPIX S1100pj's built-in projector may well be a novelty, but it's a lot of fun to use and a sure-fire hit among friends and family who'll no doubt immediately pick it up and try to view photos on every surface that surrounds them.

The built-in projector is just one of the many highlights of this compact camera though; it also has a resistive touchscreen instead of conventional button controls, a 28mm wide lens with 5x optical zoom (for a tele-zoom angle of 140mm), and a 14.1-megapixel CCD sensor. It can take reasonably crisp and clear photos when the light is right and its overall image quality is very pleasing, but it's a practically automatic camera. You can manually change the ISO, white balance and exposure compensation when you're in auto mode, but that's it, and because you have to use the touchscreen to do so, this can be cumbersome.

The resistive screen requires a fair bit of pressure in order to work and its interface isn't what you would call fast. In fact, it feels downright sluggish — this goes for the camera in general, too, as it has a relatively slow shot-to-shot performance. The worst part about the touchscreen is playing back photos, as you need to flick the screen to navigate back and forth, which sometimes takes a few goes. God forbid you have to bring up the context menu if you want to delete a photo — you may just chuck the thing out of frustration. But don't do that; just switch the camera to projector mode and use the supplied remote control to flick through your photos; save deleting and editing for when you get the snaps onto your PC.

The projector sits almost in the centre of the camera's body and it can be activated by pressing the button opposite the power button. It has a ring around it so that you can focus the projection, and it can project from as close as 20cm from a surface (which will give you a photo with a diagonal measurement of around 12cm), to as far as 2.4m, which will give you photo with a diagonal of roughly 120cm. The projector isn't particularly bright though (it's listed as being up to 14 ANSI lumens) so you'll want to have as short a throw distance as possible. We enjoyed viewing photos from around 1m, which produced photos similar in size to an A3+ piece of paper. The clarity of the projected photos is merely good, and far from breathtaking, but this is what we expected.

It may seem counter-productive to view photos with the built-in projector, especially when you could just plug the memory card into a PC or directly-attach the camera to a high-definition TV, but it's all about the new type of viewing experience and the 'wow' factor. For instance, imagine being able to throw an impromptu viewing session on a wall while at a friend's party. The biggest obstacles to overcome are the camera's low battery life (the more you use the projector, the less time you'll have for shooting), the availability of a clear and bright wall on which to view images, as well as a dark environment. It's definitely not a gadget for the easily frustrated. 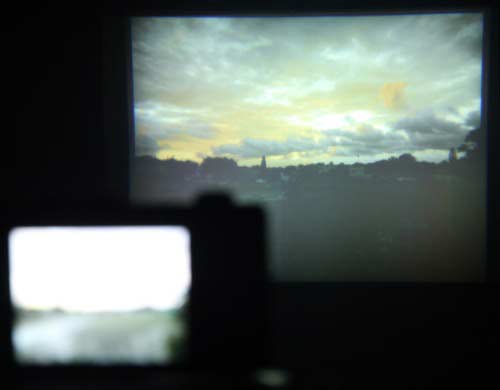 The size of this projected image is equivalent to an A3+ piece of paper. The image is being thrown from approximately 1m away.