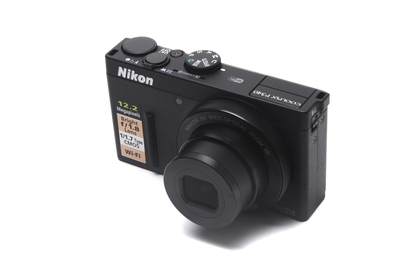 Nikon's small, pocketable Coolpix P340 can be used as a point-and-shoot camera, but it also allows you to take control of the exposure and get creative. It has limitations with regards to shooting on overly bright days, and also in overly dim ones, but it's still a useful little tool to carry around if you need more capabilities than your smartphone can offer. Apart from better image quality, you get a 5x zoom and an f/1.8 aperture to play with the depth-of-field.

The compact camera category isn’t as popular as it used to be since smartphones took off, but there is still a need for a proper camera if you want to do things such as play with a zoom lens and change the depth-of-field in your shots. Nikon’s Coolpix P340 is a small and light camera you can consider for such tasks, and it even has a few dials on it so that you can tune in to the exposure manually.

You can carry around the P340 in your pocket and use it as a spontaneous shooter while you walk around your neighbourhood, and this is thanks to its light weight of 194g, and a relatively small size of 102mm wide, 60mm high, and 30mm deep (when it’s switched off and the lens isn’t extended). The lens extends out a further 25mm once the camera is switched on. Using the zoom rocker around the shutter button, you can go from a wide angle of 24mm, right up to a zoom angle of 120mm.

It’s a camera that has a 12-megapixel sensor, with the 5x optical zoom lens sitting in front of it, and it features a wide aperture of f/1.8 at its wide angle, which comes in handy when you want to give your subject prominence in the foreground while you blur out the background. You can capture some really good shots with this camera as long as you have the proper lighting conditions, though we found that its auto mode tended to noticeably overexpose highlights when shooting on bright days. The limitations of the exposure settings come into play here, with the smallest aperture of the lens being f/8.0, and the fastest shutter speed being 1/2000 (there is a 1/4000 settings, but it’s only available under a specific burst mode scenario).

Like most cameras, there is a light meter on the screen that will tell you if your shot is exposed properly, and this should be consulted when you are shooting in manual, or in one of the semi-manual modes, such as aperture priority and shutter priority. You can use the ring of the directional pad to change the aperture setting, and the thumb dial at the top to change the shutter speed. There is a control ring around the lens that can be used to change settings as well, from manual focus, to ISO sensitivity. Furthermore, there is a function button on the front that can be customised as a shortcut to another of your favourite settings, including drive mode, colour mode, focus mode, metering mode, white balance, or ISO.

The square shape of the camera, as well as the matte finish, make it feel firm to grasp, and all of the aforementioned controls, as well as the regular function and menu buttons, are located in easy to access locations. Some of the buttons are stiff, especially the power button, which sometimes took us a few presses before it would switch on the camera. There is a plentiful rest for your right thumb while shooting, and the shutter release has a distinct two-step feel for focusing before capturing.

The focus performance in auto mode was accurate during our tests, and we like the ability to choose custom focusing spots within the main frame of the image. There is also a subject tracking focus mode, which allows you to lock on to your chosen subject, or a target finding autofocus, which picks out things you might want to focus on in the frame. The latter was a little confusing to use as it didn’t always pick up a focus point. Manual focus is available, and can be controlled via the ring on the lens and there is a focus peaking manual focusing aid, which puts a shimmering outline on the objects in your frame that are in focus.

Along with regular portrait and landscape photos, the P340 can be used to shoot macros, allowing you to get within a couple of centimetres of your subject. There are scene modes you can use, as well as colour and texture filters, and you can look into those if you want to get creative, but allow the camera to do the work for you.

We found the overall picture quality to be very good, though the camera did struggle a little during bright days, making highlights look quite overexposed. Colours were rendered nicely, though, and the general clarity of pictures was good. Since it’s a 12-megapixel sensor, you can crop photos a little if you haven’t framed your photo exactly as intended, but there is a lack of definition at the pixel level (typical for a camera in this price range), so don’t crop too much. We recommend framing the shot exactly as you intend so that you don’t have to crop.

For low-light shooting, we recommend not putting the ISO up too high. Anything over 400 can make your photos look noisy, and especially so if you crop them. There is a pop-up flash you can use, but unlike other cameras we've seen recently, it's rigid and can't be pointed up or down to soften the blow of the flash on your subject. Take a tripod if you can, and use a slow shutter speed, as long as your subjects are not moving. For portraits, make use of the f/1.8 aperture, which will allow the most light, but also blur your background.

Like most cameras these days, the Coolpix P340 has Wi-Fi, and it can be used in conjunction with the Nikon WirelessMobileUtility. Simply set the camera to Wi-Fi mode, connect to it directly using your smartphone (the camera’s network ID is shown on the back of the screen and you don’t have to enter a password), and launch the app to either view and transfer images, or use the phone as a viewfinder. It’s one of the easiest apps we’ve used to date: it connected first go, and it worked as intended. You get the option of downloading photos at three sizes (original, recommended, or VGA), which is useful if you want to post the highest quality photo to Flickr or another photo-sharing site while you’re out and about (though this will eat into your data cap).

Pick up this camera if you want more picture-taking control than your phone can offer. It’s small, capable, and can be used in manual mode quite effectively, making it a good option if you want to become a student of photography, but don’t have a large budget, nor a want for a larger, bulkier camera. It does struggle a bit during bright days, though, so look out for that and try and adjust for it.

These are JPEG images straight out of the camera with the only modification being made to the size so they can fit this page. The camera also supports RAW mode.