Drop-outs while it's hot 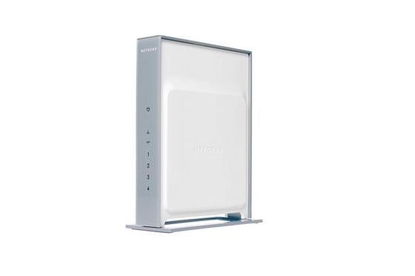 Good features and wireless streaming speed were countered by random drop-outs, which caused us many headaches.

The airy box that surrounds the inner workings of Netgear's WNR854T wireless router certainly isn't the smallest we've seen. Its large size serves a purpose: it allows the unit's three antennas to hide inside. The WNR854T is an 802.11 draft-n router with a four-port Gigabit Ethernet switch, so it should provide plenty of bandwidth for users after quick wireless and wired speeds — when the router works.

After an extended evaluation of this router, using the latest firmware, we found it to be unreliable, both for streaming media, and for keeping an Internet connection alive. After seemingly random periods of time, the router dropped off our network completely – it would drop wireless and wired computer connections – and would only work after a reset. This happened a lot during the first few days we used it, then it settled down for a while, then it started dropping out again, then it became reliable again. It was quite moody.

We used the router with an ADSL1 connection (512Kbps) to download torrents on a main PC, to stream video to a Netgear Digital Entertainer HD EVA8000 and to use the Internet on a roaming laptop and a secondary wireless PC. This usage pattern didn't change – it's the same one we use for all routers – nor was the router ever powered down for more than a few seconds during our tests. Nevertheless, the uptime of the router varied from a few minutes to a few hours, up to a few days. It's a problem that we were not able to pin down to a specific machine or task.

However, when it did stay up for a long period of time, it produced an average wireless throughput of 5.71MBps to our laptop. This was recorded in 'mixed mode' (802.11g + 802.11 draft-n) and in 'max speed mode' (strictly 802.11 draft-n). So even though 802.11g devices were connected to it in mixed mode, the router was still able to reach its maximum speed. When streaming a DivX-encoded video to the EVA8000, the 802.11 draft-n transfer rate dropped to 4.79MBps. This means there is still ample bandwidth for other tasks while streaming videos across a wireless network.

Indeed, despite its maximum transfer rate being slower than the Linksys WRT310N, the last draft-n-based router we reviewed, the WNR854T had a better file transfer rate to our laptop while simultaneously streaming data to the EVA8000.

We weren't able to use our standard Linksys 300N (version 2) notebook adapter for testing, as it would only connect to the router at 54Mbps. Instead, we had to use a Netgear WN121T USB adapter in order to reach maximum speed.

The WNR854T's interface is simple and has good features. The Setup Wizard detected our Internet connection in a few seconds, and all we had to do was enter our login details. However, the Wizard didn't offer us the option of changing our wireless settings.

The unit comes with a built-in firewall, and keyword filters can be applied. A message saying "Web site blocked by NETGEAR Firewall" will appear when attempts are made to access unauthorised content.

Annoyingly, the router restarted automatically after any settings were changed, be they wireless or firewall related. Even changing the wireless channel, or simply adding a keyword to the filter, made the router restart, which was very annoying.

Basically, the WNR854T was more of a headache than a joy to use, but it produced good speed for streaming videos when it did work. If it was more reliable, played nicer with non-Netgear adapters and didn't restart after every single change, we wouldn't have given it such a low rating.