Netgear's Push2TV HD is an Intel Wireless Display adapter that makes it simple to use your TV as a secondary, wireless screen for your notebook 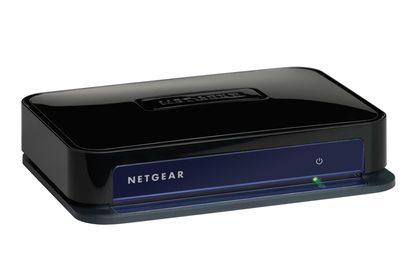 Netgear's Push2TV HD adapter is an Intel Wireless Display adapter that's useful for turning your TV into a secondary display for your laptop. It makes it easy to watch downloaded videos and Internet streams on your TV, without you having to fiddle with cables, and while allowing you to still use your laptop while you lounge on your couch.

Netgear's Push2TV HD WiDi adapter (also known as the PTV2000) isn't as pretty to look at as Belkin's ScreenCast TV, but it's just as good at delivering video content from your laptop to your TV. You can hook it up to any TV or projector that has an HDMI port, and you can even use it on older TVs through Composite video and analogue audio connections.

The Push2TV HD looks more like a tiny router or standard media streamer than a WiDi adapter, which is to say it's a square box with a subtle status light. This is in contrast to Belkin's adapter, which has a sleek and shiny style more suited home entertainment units. Both Netgear's adapter and Belkin's ScreenCast TV WiDi adapter perform the same task: they enable Intel Wireless Display (WiDi) capable notebooks to use a TV (or projector) as a duplicate or extended secondary screen. Like the Belkin, the Netgear also supports a maximum resolution of 1920x1080, but it defaults to and performs best at 1280x720.

Setting up the Push2TV HD

Installing the Push2TV HD isn't difficult, but you will need to make sure your laptop is properly configured to handle WiDi. You won't be able to use this adapter unless your notebook has a WiDi-capable Intel wireless networking adapter installed, which means your laptop will need to have one of the following adapters:

If you have one of these adapters (look under the Network adapters section of Windows 7's Device Manager to find out), you can check in the Windows Start menu, under the Intel Corporation folder, to see if WiDi software has been pre-installed by your notebook manufacturer. If it hasn't, you will need to download the software from Intel's Web site.

For best results, use HDMI to plug the Netgear Push2TV in to your TV. Power it on and then switch to that input on your TV. You will see the Netgear welcome screen, which shows that the adapter is ready to make a connection with your laptop. Fire up the Intel WiDi software on your laptop, perform a scan to find the adapter, and then connect to it. A four-digit PIN will be shown on the screen, which you will need to enter in order to connect securely to the adapter, and you won't have to do this again from that laptop.

WiDi relies on a direct connection between your notebook's wireless networking adapter and the TV-connected Netgear adapter, which means that there are no network settings for you to fiddle with. It's very much a plug-and-play solution and the only settings that can be tweaked involve the screen size and the behaviour of the mouse pointer on the screen.

You'll need to bear in mind that because your notebook's wireless adapter will be used to transfer the video information from your laptop to your TV, any other network traffic can impact on the video performance. If you'll be using the Internet heavily while also using WiDi, the wireless adapter in your notebook might not be able to keep up with the WiDi bandwidth requirements and you might notice things like dropped frames, image break-ups or artefacts.

In my tests, I used an Intel Core i7-based laptop with an Intel Centrino Advanced-N 6205 wireless adapter located 3m away from my TV and the Netgear WiDi adapter. I set up the Netgear adapter to act as a secondary display with a resolution of 1280x720 (the recommended resolution for WiDi adapters), which allowed me to continue to use the laptop for Web browsing and writing tasks while playing a video on my TV. Locally-stored video files on the laptop played smoothly through WiDi, although there were some dropped frames now and then. I got used to them after a while.

I also tested the WiDi adapter (and stressed the wireless adapter in my laptop) by streaming Internet video from the NBA's LeaguePass Broadband service at a quality of 1600 kilobits per second (Kbps). The video was a little 'jumpier' than it was when I was playing locally-stored video files, but it was still of acceptable quality and enjoyable to watch. Importantly, it didn't stop and start too often and artefacts weren't an issue. However, when I increased the quality of the Internet stream to its maximum of 3000Kbps, the bandwidth demands on the laptop's wireless adapter became too much for it and the video was just too uncomfortable to watch, with regular stuttering and break-ups. HD content using the 1920x1080 resolution of the adapter also suffered the same fate. Its performance mirrored what we saw in the Belkin adapter in this respect, using the same environment and test equipment.

Basically, if your notebook supports WiDi and you want to watch downloaded videos or Internet streams on your TV, the Netgear Push2TV HD adapter is a good solution. It's very easy to set up, there are no wires except on the WiDi-adapter-to-TV end, and the performance of the video will be good as long as your wireless network adapter can supply enough bandwidth. You'll be able to play DVDs and Blu-ray discs through your laptop on your TV as well, although protected content will only play if your TV supports HDCP (and most models from the last two or three years should meet this requirement).